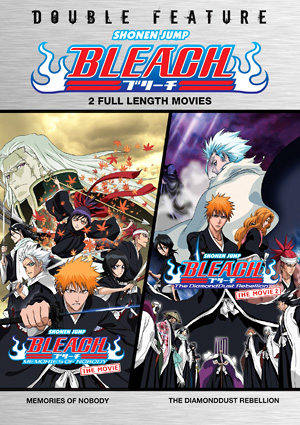 Bleach the Movie: Memories of Nobody
After unidentified beings known as "Blanks" start popping up, they are soon followed by a Soul Reaper named Senna who makes them disappear. Puzzled by these unknown beings and the even more mysterious girl, Ichigo and Rukia set out to learn more, but uncover an evil plot when a menacing clan tries to kidnap Senna. Banished from the Soul Society long ago, the clan's leader is sending the World of the Living and the Soul Society on a collision course, and Senna seems to be the key to his diabolical plot for revenge. Can Ichigo and his fellow Soul Reapers save the two worlds from annihilation?

Bleach the Movie: The Diamondudst Rebellion
After the treasured Ouin is stolen, Toshiro Hitsugaya disappears and becomes suspected of treason. When the Soul Society calls for his capture and execution, Substitute Soul Reaper Ichigo Kurosaki vows to prove Hitsugaya's innocence. Will the secret of the Ouin and Captain Histugaya's motives be revealed before his honor, his life, and the Soul Society are destroyed?