The chaos of youth will test the greatest of ninja!

The life of the shinobi is beginning to change. Boruto Uzumaki, son of Seventh Hokage Naruto Uzumaki, has enrolled in the Ninja Academy to learn the ways of the ninja. Now, as a series of mysterious events unfolds, Boruto’s story is about to begin!

Author/artist Masashi Kishimoto was born in 1974 in rural Okayama Prefecture, Japan. Like many kids, he was first inspired to become a manga artist in elementary school when he read Dragon Ball. After spending time in art college, he won the Hop Step Award for new manga artists with his story Karakuri. After considering various genres for his next project, Kishimoto decided on a story steeped in traditional Japanese culture.

His first version of Naruto, drawn in 1997, was a one-shot story about fox spirits; his final version, which debuted in Weekly Shonen Jump in 1999, quickly became the most popular ninja manga in the world. The series would also spawn multiple anime series, movies, novels, video games and more.

Having concluded the series in late 2014, Masashi Kishimoto kept himself busy penning continuing adventures in the Naruto world, including the manga Naruto: The Seventh Hokage and the Scarlet Spring and the story for Boruto: Naruto the Movie, both of which focus on the title character’s son, Boruto.
Add favorite  Favorited Boruto - Kawaki trailer Manga trailer

Stream Boruto: Naruto Next Generations on Hulu and Crunchyroll!

Naruto takes a troubled Kawaki under his wing and tries to use compassion to break through his defensiveness. But Boruto’s not happy to have a new roommate with a bad attitude. Naruto’s got his hands full with two rowdy boys! Then a sudden attack on the Leaf Village sends everyone into battle! Delta forces her way into the village to take Kawaki back. But that’s just the beginning—Kara has made their move, and even the mighty Naruto is threatened!

Other Boruto: Naruto Next Generations anime

Now with the mysterious Eida at his side, Code continues his march for revenge against Boruto and Konoha village. Even with Naruto and Sasuke on alert, stopping Code and his warping ability may be impossible. However, Kawaki seems to have some secret plans of his own.

Other Boruto: Naruto Next Generations volumes 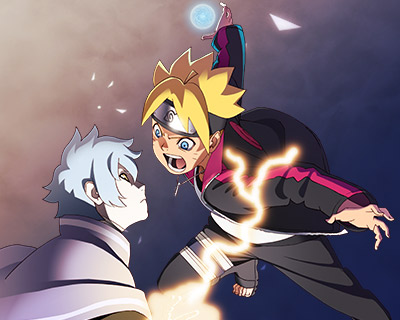 Never miss a new release. Add Boruto: Naruto Next Generations to your favorites, and start following it today!