Striving for enlightenment by way of the sword, Miyamoto Musashi is prepared to cut down anyone who stands in his way. Vagabond is an action-packed portrayal of the life and times of the quintessential warrior-philosopher—the most celebrated samurai of all time!

Takehiko Inoue is the creator of one of the most popular manga of all time, Slam Dunk, which has sold over 100 million copies worldwide. He followed that series up with two titles lauded by critics and fans alike—Vagabond, a fictional account of the life of Miyamoto Musashi, and Real, a manga about wheelchair basketball. Inoue is the recipient of numerous awards, including the prestigious Tezuka Osamu Culture Award and the Media Arts Festival Award. In addition to manga, Inoue has worked on television commercials and character designs for video games, and is the founder of a scholarship to foster Japanese basketball talent.
Add favorite  Favorited

Miyamoto Musashi and Sasaki Kojiro’s intertwining paths lead them toward what will be the greatest samurai duel in Japanese history. Sasaki Kojiro heads to Kokura for his new position as sword instructor for the powerful Hosokawa Clan. Meanwhile, Musashi is at a crossroads dealing with the aftermath of single-handedly destroying the mighty Yoshioka clan. After he starts to question his quest to be invincible and his whole reason for existence, will his confidence in himself ever be the same? 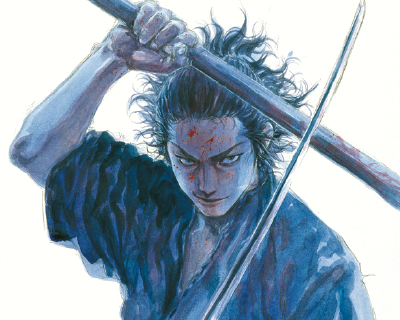 Never miss a new release. Add Vagabond to your favorites, and start following it today!