A tale of triumph over adversity through wheelchair basketball, by Eisner Award nominee Takehiko Inoue.

Takehiko Inoue is the creator of one of the most popular manga of all time, Slam Dunk, which has sold over 100 million copies worldwide. He followed that series up with two titles lauded by critics and fans alike—Vagabond, a fictional account of the life of Miyamoto Musashi, and Real, a manga about wheelchair basketball. Inoue is the recipient of numerous awards, including the prestigious Tezuka Osamu Culture Award and the Media Arts Festival Award. In addition to manga, Inoue has worked on television commercials and character designs for video games, and is the founder of a scholarship to foster Japanese basketball talent.
Add favorite  Favorited

Out of shape and out of practice, Nomiya comes to terms with the reality of where he’s at in basketball and in life. Meanwhile, Togawa faces one of the biggest disappointments in his wheelchair basketball career. And just when Takahashi finds a glimmer of hope in playing ball again, he’s confronted by the enormity of how much he has to overcome. Will each player’s passion for the game be strong enough to pull him through? 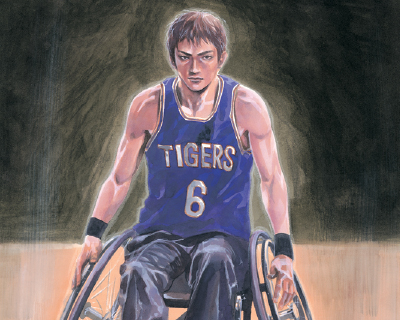 Never miss a new release. Add Real to your favorites, and start following it today!