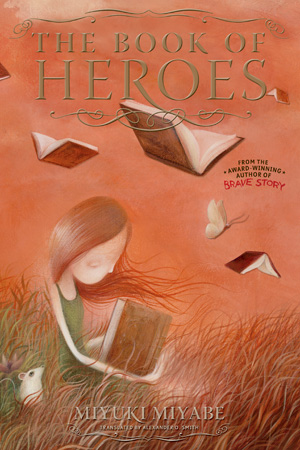 When her brother Hiroki disappears after a violent altercation with school bullies, Yuriko finds a magical book in his room. The book leads her to another world where she learns that Hiroki has been possessed by the evil King in Yellow, and that only she can save him...and solve the riddle of why the King is also called "Hero."

If you like The Book of Heroes, VIZ Editors recommend:

The Book of Heroes - Excerpt

Ash stroked his pointed chin with his fingers, and his half-lidded eyes slowly turned to U-ri. "Best not to give that girl Michiru a false sense of hope. There is no guarantee we can bring Hiroki back."

U-ri felt her hackles rise. "What do you mean we can't bring him back?"

"Maybe not in the way that Michiru hopes, at least. He has become the vessel, after all."

It sounded like he was declaring that Hiroki Morisaki would never again return to his old life. U-ri swallowed the cold fear she felt rising in her throat. "So we can't even find him?"

"Because I've been around." Ash turned to Sky. "You there." His tone was cold, accusatory. Sky tensed. "Why did you accompany U-ri?"

U-ri stepped between Ash and the devout. She felt like she had to protect her servant, though she wasn't sure why. "Look, when The Hero broke free of its prison the Hollow Book was damaged." U-ri quickly began to explain all that had happened in the Dome of Convocation--mixing her own thoughts with what the Archdevout had told her. Ash listened without blinking. It was less like he was actually listening and more like he was simply letting U-ri explain herself into exhaustion. When she paused, he looked again at Sky.

U-ri glanced sidelong at Sky. He looked confused. When he began to speak, he did so shakily.

U-ri gritted her teeth. "He's just answering your question! Why do you have to be so mean to him?"

"Be mean? To a nameless devout? Now there's an interesting concept." Ash pointed at Sky. "He is nothing, you understand, and nothing else. Whatever you think he might feel or might think is all illusion."

"Then why did you ask him what he thought?"

"I merely wished to know what the illusion contained." The man snorted. "And what he told me was pretty much what I expected. I don't need to hear anymore."

Now U-ri was really getting angry. I take back what I thought before. His heart is as black as his robes. "Sky is my servant! I'd have you treat him with the respect he deserves!"

"Respect?" Ash lifted an eyelid and leaned toward her, fixing her with his gaze. "Did you just say 'respect'? Very unusual."

"And that's something special? Is that what the Sage and the nameless devout told you?" Ash pointed his chiseled nose toward the ceiling of the library and laughed out loud. "Newly forged, and yet you strut with the best of them. You don't even know why allcastes exist!"

U-ri recalled how the man had dispatched the eyeball creature in the hallway. How he had sighed when he saw her.

"I didn't mean to be prideful," U-ri said at last, restraining her desire to shout at him. "Just, I don't think you should call Sky 'nothing.'"

"Why not?" came Ash's immediate retort.

"Because he's standing right here. He's not 'nothing.'"

"Lady U-ri," Sky whispered, touching his fingers to her arm. "It's all right. I am indeed fashioned of nothing."

"You're just going to let him call you that?"

Sky shrank away from her. Ash bent his long thin legs and sat again, shaking his head. "So quick to get all excited. This is why I don't like dealing with girls."

"Learn to walk the walk if you chose to talk the talk, child," Ash advised her, raising one of his bushy white-streaked eyebrows. "Standing there with your pet and your servant. How very like a child you are."

Unconsciously, U-ri took a step away from Sky.

"And as far as Sky is concerned, I believe you were far more frightened in the hallway than he was. I'm surprised you haven't given up chasing The Hero yet and gone home."

She thought he was teasing her, but then he pointed at her forehead. "You should go to the Sage who gave you that glyph and have him take it off. You'll be free of all this then."

U-ri stepped back, ashamed of the fear she felt. "B-but then you'd be in trouble, without me."

"Not particularly. Not at all, really. It would just make my job a little bit more difficult. First I'd have to find another allcaste."

U-ri was as shocked as she would have been had he slapped her cheek. "A-another allcaste?" she stammered.

"Another, yes. Or did you think you were the only one in the entire Circle? No wonder you thought you were so special. Technically speaking, there can be as many allcastes as there are vessels. More, even, since they only need be related to the vessels, and most people have more than one relative."

"Well maybe we'll just find ourselves another wolf," Aju squeaked, baring his teeth. "There's lots of them around. We'll just find one who's nicer, and kinder, and more respectful of U-ri."

Ash didn't seem concerned. "You could. Though I don't think that's your best option. Know why?" The man touched a large hand to his chest. "I know the Book of Elem inside out. I don't know how many hairs are on my head, or how many in my eyebrows. But I know that copy well. I know exactly what's written inside it. I know the number of words, the number of lines. I know how many times a particular word appears in a particular chapter. And I know all the names it contains. I even know the words that appear in it only once. Were it not taboo, I could recite its contents entirely from memory for you here right now. I've recited them to myself many times. Thankfully no one was nearby to hear. That's why you should join me. Either that, or you'll waste time wandering--"

The man stopped in the middle of his monologue. His mouth opened then snapped shut like a word had escaped unspoken.

He lowered his eyes and lightly shook his head in the direction of the checkout desk where Michiru lay.

"The more time you waste," he said quietly, "the more the sadness will spread around you. The more little worlds will end, one after another." He looked at U-ri, his voice gentle again. "You don't like conflict, do you?"