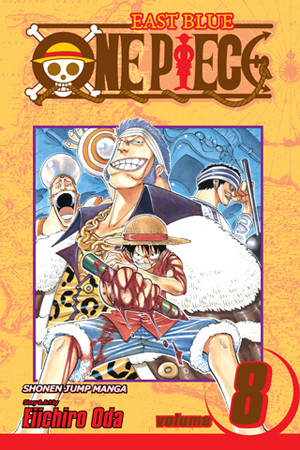 If Luffy wants to get out of a year's worth of chore-boy duty on the oceangoing restaurant Baratie, he's got to rid the seas of the evil Don Krieg. Unfortunately, Krieg's armed to the teeth and aided by his "Demon Man," Commander Gin. The battle takes a surprising turn as Krieg reveals his increasingly deadly military might! Meanwhile, Nami has sailed off on the Merry Go with treasure in tow, and she's headed to Arlong Park, home of creepy Captain Arlong and his Fish-Man Pirates. What business does Nami have at Arlong Park, anyway? Something fishy is going on and Luffy's crew just may be in over their heads!