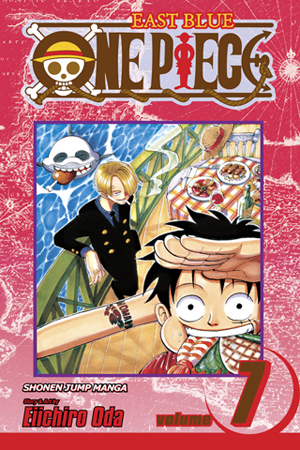 Don Krieg's evil pirate armada attempts to hijack the oceangoing restaurant Baratie, but the pirate cooks put up a fierce resistance until Krieg reveals one of the greatest secret weapons in his arsenal--Invincible Pearl! When sous chef Sanji steps into the fray, it turns out that he and Chef Zeff have some unfinished business concerning the loss of the latter's leg! Will their differences come between them or make the Baratie stronger? Either way, unfortunately for Luffy, it turns out that Don Krieg harbors an even deadlier weapon--Gin, the very man whose life Sanji once saved with a square meal!