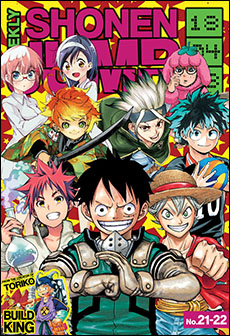 I could stare at this cover all day! Look at all the beautiful, bright shining faces! This is the kind of cover that makes me want to take it everywhere and show random people exclaiming, "Look at all my friends!" But I won't, because last time it scared people. And the coolest thing is the characters are all wearing each other's outfits! We should try that in the office.

The Straw Hats have done it again! They were already legendary, but the news of this latest skirmish will travel far and wide! And in this chapter, we're treated to a song about the adventure sung by everyone's favorite animated inanimate objects, the Homies. There's something magical about reading a song in a manga, for one, you get to imagine your own music. And since it's a manga about sea-faring pirates, it makes even more sense their adventure would be put to song. 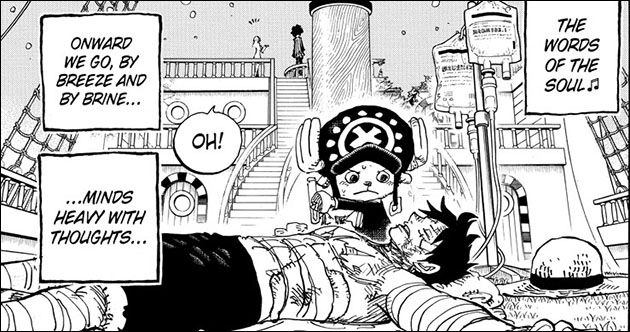 This is one fight that just keeps on keeping on! And as a reader, I'm enjoying every moment of it. Usually, in manga battles you want one guy to lose (the villain, mainly), but this fight it's hard to pick a side, as they're both such great and likable characters. But all things come to an end, even great fights like this. Find out who won and what comes next!

Bayon the demon thought he was tricking the kids, but got quite the surprise when he realized they were reeling him in like a many-eyed fish! But the fight's far from over, as this demon is as crafty as they come. Can he escape the careful trap they've laid? Or will another demon get his comeuppance?

Senku, Chrome and Magma go spelunking in a cave to find the precious minerals needed for the latest scientific invention. Even though they have headlamps and can see, a cave is a very dangerous place. Especially to those who are not experienced explorers. Will they find the treasure they seek, or their doom instead? 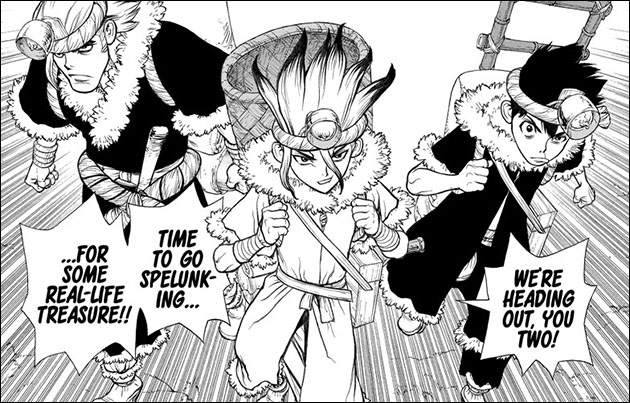 The Don is hopping mad that Robo-kun escaped his carefully laid trap. Turns out, it was an optical illusion! Now that the Don's been defeated, what will he try next to add strokes to Robo's score? Meanwhile, Robo's rival has a little problem of his own--his ball lands in a tree! It's one thing to land in the bush, but in a tree?!

There are some chapters of manga that you just know are special when you read them. Not special like really cool, but special like, "This will be remembered." This is one of those chapters. Erina and Soma serve up their dishes and what happens next will become a legend! 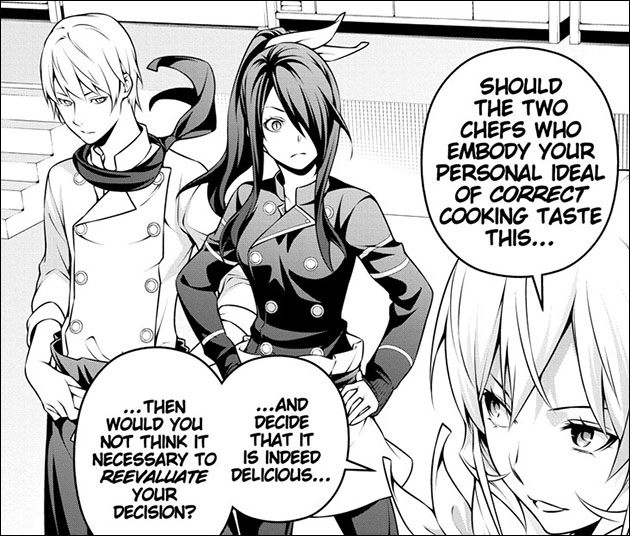 Yay, a new one-shot by the creator of Toriko! It's so wonderful to see his art again, I really missed it. And it's a little different here as it has more of a storybook quality. And what a kooky idea--it's about a magic house builder that owns a living house. A living house with attitude! And when two home thieves come to try and steal the house, all heck breaks loose! This is a one-shot you'll never forget!

The valiant Mereoleona has managed to give the reborn elves whatfor despite being seriously outnumbered. But she can't do it alone! Luckily, backup arrives in the form of Asta and bad mage turned good, Zora! Even with their combined power and trickery, they're still in over their heads. Then Asta has an encounter with an unexpected foe!

Yuiga accidentally causes Kominami to get injured! While it's just a mild sprained wrist, Yuiga can't deal with the guilt of causing her pain and becomes her slave. With Kominami's twisted sense of humor, you can see where this is going. Can she resist teasing him and trying to make him blow his top? Nope. Another hilarious Yuiga torture chapter! 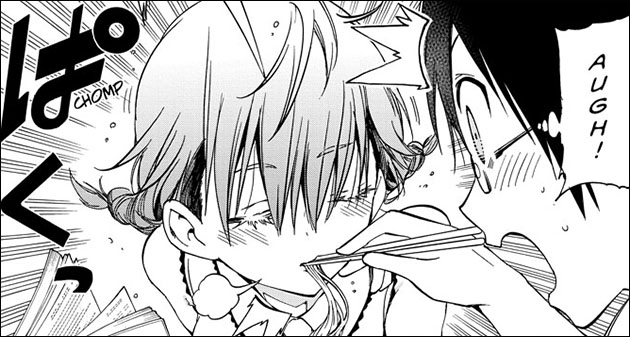 Oh my Genesis Omega Dragon, this manga has gone cosmic! And in the most delightful way. Kinda seems like a lot of Yu-Gi-Oh! series end up in a big space duel. At least the last one did. This time, the stakes are incredibly high as Yuya comes face to face with Eve, who holds the legendary G.O.D. card!