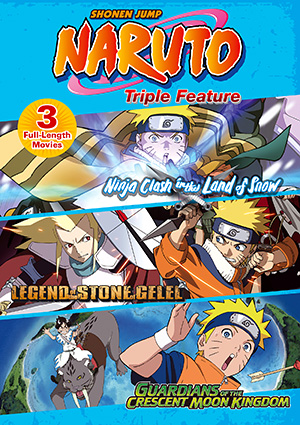 Featuring 3 Classic Naruto Movies Together for the First Time!

Ninja Clash in the Land of Snow: Naruto and his team are sent on a mission to guard Yukie Fujikaze, a popular actress starring in the hit movie "The Adventures of Princess Gale." The crew is heading toward the Land of Snow, a land forever covered in snow, to shoot the final scenes of the film. When Yukie refuses to go and escapes from the set, she is brought back by force by Naruto and his teammates. But little do they know there are three rogue Snow Ninja lying in wait with a sinister purpose that forces Yukie to make a crucial decision and face her hidden past.

Legend of the Stone of Gelel: Naruto, Shikamaru and Sakura are in the middle of the easiest mission ever, when a young knight, Temujin, attacks them out of nowhere! Soon they are drawn into a fierce struggle over a treasure harboring legendary power—the Stone of Gelel. Temujin's master wants to use the stone's power to create a utopia, while the last of the clan who once controlled the stone wants to keep it sealed away forever. When the dream of utopia becomes a nightmare, it'll take a ninja to set things right!

Guardians of the Crescent Moon Kingdom: Naruto, Sakura and Kakashi team up with Rock Lee to protect Prince Michiru and his son Hikaru on their return home to the Crescent Moon Kingdom. Easy enough, until the royal family becomes a royal pain! Prince Michiru can't help indulging his son, even buying him a circus along the way! Naruto has a tough time putting up with both the spoiled Hikaru and a saber-toothed tiger, but the real adventure begins when they reach the Land of the Moon and find themselves facing a villainous uprising. Does Naruto have what it takes to save an entire kingdom?

Samurai 8: The Tale of Hachimaru
See all >