A romantic retelling of a classic fairy tale about a beautiful herbalist and a lovestruck prince.

Shirayuki is an herbalist famous for her naturally bright-red hair, and the prince of Tanbarun wants her all to himself! Unwilling to become the prince’s possession, she seeks shelter in the woods of the neighboring kingdom, where she gains an unlikely ally—the prince of that kingdom! He rescues her from her plight, and thus begins the love story between a lovestruck prince and an unusual herbalist.

Sorata Akiduki was born on March 21 and is an accomplished shojo manga author. She made her debut in January 2002 with a one-shot titled “Utopia.” Her previous works include Vahlia no Hanamuko (Vahlia’s Bridegroom), Seishun Kouryakubon (Youth Strategy Guide) and Natsu Yasumi Zero Zero Nichime (00 Days of Summer Vacation). Snow White with the Red Hair began serialization in August 2006 in LaLa DX in Japan and has since moved to LaLa.
Add favorite  Favorited

Shirayuki and Zen are enjoying some rare time off up in Lilias when they spot Obi out and about with an unfamiliar woman. Their curiosity sparked, they decide to play detective and trail Obi! Meanwhile, Mitsuhide and Kiki arrive in Lilias themselves, where Kiki plans to make a full report on how she proposed to Mitsuhide and got rejected!

Other Snow White with the Red Hair volumes

If you like Snow White with the Red Hair VIZ Editors recommend: 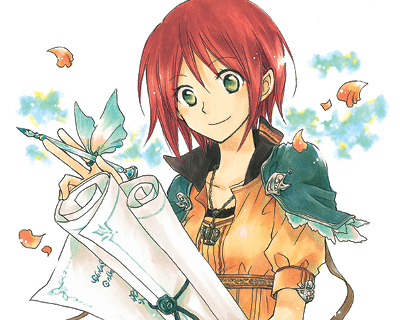 Never miss a new release. Add Snow White with the Red Hair to your favorites, and start following it today!