Takahashi was inducted into the Will Eisner Comic Awards Hall of Fame in 2018. She won the prestigious Shogakukan Manga Award twice in her career, once for Urusei Yatsura in 1981 and the second time for Inuyasha in 2002. A majority of the Takahashi canon has been adapted into other media such as anime, live-action TV series, and film. Takahashi’s manga, as well as the other formats her work has been adapted into, have continued to delight generations of fans around the world. Distinguished by her wonderfully endearing characters, Takahashi’s work adeptly incorporates a wide variety of elements such as comedy, romance, fantasy, and martial arts. While her series are difficult to pin down into one simple genre, the signature style she has created has come to be known as the “Rumic World.” Rumiko Takahashi is an artist who truly represents the very best from the world of manga.
Add favorite  Favorited

Lum, Ataru, and Shinobu accidentally get their hands on a key of fate that unlocks the door to their future! Well, a future. Shocked by the terrible destiny in store for them, the friends do their best to find their happily ever after. But why is every new version worse than the last?! Later, boy-phobic Asuka can finally breathe a sigh of relief when she begins attending an all-girls school with such tight anti-boy security that even gentleman dogs can’t wander on campus. Her paradise is soon compromised, however, when the Tomobiki High principal comes up with a creative intramural challenge that shatters the peace of Fastidious Female Junior High! 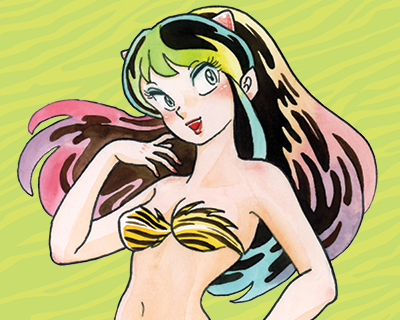 Never miss a new release. Add Urusei Yatsura to your favorites, and start following it today!