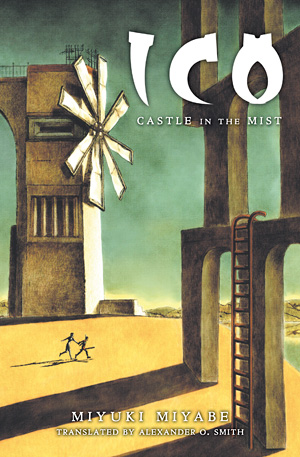 ICO: Castle of the Mist

When a boy named Ico grows long curved horns overnight, his fate has been sealed—he is to be sacrificed in the Castle in the Mist. But in the castle, Ico meets a young girl named Yorda imprisoned in its halls. Alone they will die, but together Ico and Yorda might just be able to defy their destinies and escape the magic of the castle.

Based on the video game filmmaker Guillermo del Toro (Hellboy, Pan's Labyrinth) called a “masterpiece,” Japan's leading fantasist Miyuki Miyabe has crafted a tale of magic, loss, and love that will never be forgotten.

If you like ICO: Castle in the Mist, VIZ Editors recommend:

ICO: Castle of the Mist - Excerpt

The boy was smiling.

Toto understood instantly. He wasn’t hiding from whatever it was everyone else had been looking at—he was playing hide-and-seek. Whatever happened to the people in this city had happened so quickly, he hadn’t even had time to realize that he was about to die.

Reluctantly, Toto admitted what he had known for some time already. This city was no grand work of sculpture. This was the reason why the mountains in the north were forbidden. This was the curse of the Castle in the Mist.

The master in the castle was capable of dooming an entire walled city in the space of a breath.

This was what Ico had seen. This was what he meant by “trouble”, why he was so determined to sacrifice himself for the village.

Arrow Wind gave a light whinny and rubbed his nose on Toto's shoulder. Toto stood, rubbing the horse’s neck, unable to take his eyes off the stone boy. At the end of the street, he saw a stable. The horses were still inside, their manes a uniform ashen gray. Toto was acutely aware of Arrow Wind's warmth beneath his hand, the softness of his mane, and the musty smell of him. He pictured Arrow Wind turning to stone, a cold grey like the other horses.

Arrow Wind whinnied louder, his front hooves lifting off the ground. Toto pulled on the reins and looked up at him, when he spotted something in the western sky—something that shouldn't be. It was a thin, black mist, or perhaps a distant swarm of insects. As the mist drifted closer, it began to coalesce into a shape. He saw a broad forehead, the straight bridge of the nose, and flowing black hair. Finally, he saw a pair of eyes.

It was a woman's face, covering the sky above him.

Toto remembered playing once with Ico in a cave near the village. They had gone deeper than any of the other kids dared, and discovered an underground pool. The water was clear as crystal, and a faint light glowed at the bottom. Ico and Toto threw stones into the pool. The echoes of the splashes reverberated off the walls of the cave, followed by another splash, and another echo. They kept tossing stones, until the echoes overlapped one another, making a strange music that sounded almost like a vesper prayer. That was what this voice reminded him of—though the woman’s face hung in the sky, her voice seemed to echo from the depths of the earth. Or maybe she was speaking directly into Toto's soul.

Who are you? Why are you here?

The woman’s lips twisted like pennants in the wind.

Now Arrow Wind reared and shook his mane, and the reins slipped from Toto's hand. Before he could regain them, the horse galloped off madly.

The horse kicked his way through a crowd of stony faces. In the sky above, the woman turned her gaze to follow him. Lips of black mist pursed and she blew a gentle breath.

Toto felt an icy wind blow over his head. The breath swept down the street, catching Arrow Wind in an instant, and wrapping around his beautiful chestnut coat. Toto watched as his bushy tail, his hind hooves, his legs, and finally his back and mane turned to gray.

Arrow Wind's scream ended abruptly; he was frozen in stone, front legs rearing up, hooves inches away from another of the stony city-dwellers.

Toto ran in a daze. He did not dare look behind him, but he could feel that face floating there in the sky, giving chase, the same way he understood without looking that the face was smiling.