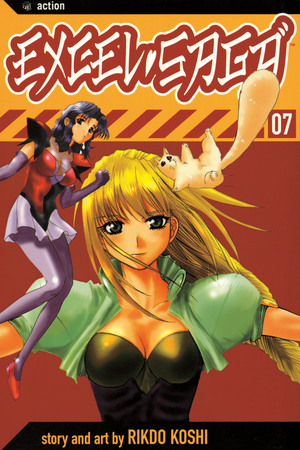 Just because Sumiyoshi has the sight, weight, and barely comprehensible speech patterns of a CS/EE major, doesn't mean that he is one. But then--just how much memory does he have stashed inside that room of his? Outside in the blue sky and sunshine, the chickens of the sea have come home to roost for Fukuoka's big Birdman-By-The-Beach contest, where various freaks and losers, including most of Excel Saga's cast, pit their feeble thrashings against Earth's gravity in pursuit of one...million...uh, yen. If Excel, Hyatt, and Mince can survive with a majority of their bones unbroken, their next mission stands to increase ACROSS's forces by 33.3%, provided the girls can make contact with a prospective new recruit--somewhere within the new cliffside resort run by the mysterious vet from Vol. 05. But war memories flash back from his bald skull--or is that just the gleam off the Messerschmitt BF 109 G-6 he's got fueled up in a basement hangar?