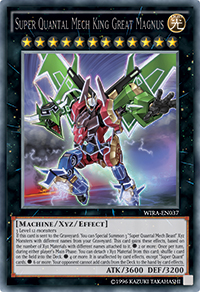 Super Quantal Mech King Great Magnus is the card that mecha-loving Duelists have always dreamt of—a 3600 ATK behemoth Summoned by combining three smaller robots together! The first step to assembling Great Magnus involves getting the pilots to their individual machines. Each of the three pilots has an effect when they're Summoned and an effect when they're sent to the Graveyard to help you get all of them together.

Holding the team together through tough times is their good animal friend, Super Quantum Fairy Alphan! Alphan can match the Levels of all your monsters for Xyz Summons or be Tributed to randomly Summon one of the three pilots while sending the other two to the Graveyard, letting you activate the abilities of all three! While the pilots are on the field, you can either match them with another monster of the same Level to Xyz Summon their robot or use the Field Spell Super Quantal Mech Ship Magnacarrier. Magnacarrier lets you discard one card to Xyz Summon using only one Xyz Material, so if you get all three pilots on to the field, you can discard three cards to Summon all three of their robots!

With all three robots on the field, you can send Super Quantal Mech Ship Magnacarrier to the Graveyard to combine the ships into Super Quantal Mech King Great Magnus! In addition to its 3600 ATK, it gets extra abilities depending on how many Xyz Materials are attached to it. Since you’ll have six Xyz Materials, your opponent won’t be able to add any cards from the Deck to their hand, Great Magnus will be totally unaffected by card effects, other than “Super Quant” effects of course, and you can detach one Xyz Material during either player’s Main Phase to shuffle any card on the field back into the Deck...without targeting it! And on top of all of that, no matter how many Xyz Materials Great Magnus has, in the extremely unlikely event that Magnus would be destroyed, it’ll just split back up into the three Super Quantal Mech Beasts that were used to Summon it!