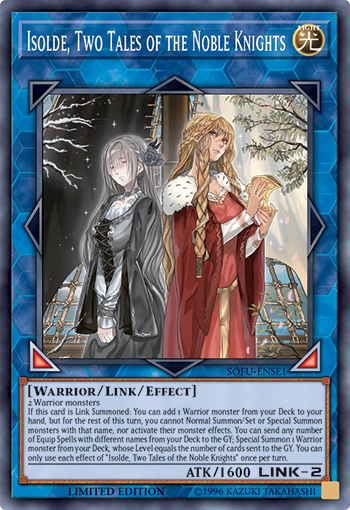 Isolde has been dominating the top tables of Yu-Gi-Oh! TRADING CARD GAME tournaments for several months, and it’s not hard to see why. It’s an easy-to-Summon Link-2 Warrior with a bunch of awesome effects.

You can Link Summon Isolde by using any two Warrior monsters as Link Materials. While you have Isolde in an Extra Monster Zone, its two Link Arrows will point to two of your Main Monster Zones, allowing you to Special Summon monsters from your Extra Deck into those zones.

Isolde’s first effect lets you add ANY Warrior monster from your Deck to your hand if Isolde’s Link Summoned. In a dedicated Noble Knight Deck, you can also use this effect to add any Noble Knight monster to your hand, since all of the Noble Knights are Warriors. There are multiple new “Noble Knight” monsters in Soul Fusion and Cybernetic Horizon that you can get with Isolde.

Any Deck that uses Equip Spell Cards and Warrior-Type monsters together can take advantage of this effect. One way to do so is by combining the Warrior you Special Summon from your Deck with Isolde to bring out the Link-3 Summon Sorceress, which is available as the second Super Rare variant card in the Soul Fusion Special Edition!

You can get your hands on a Super Rare copy of Isolde, Two Tales of the Noble Knights or Summon Sorceress, in Soul Fusion Special Edition , available now!