An out-of-this-world Neo-Spacian support is available in the Soul Fusion Special Edition! Each Soul Fusion Special Edition includes one of two Super Rare preview cards from the upcoming Savage Strike booster set. One of those cards is the otherworldly Neo Space Connector! Neo Space Connector bridges the gap between Neo Space and the Dueling field, allowing Duelists to easily Summon the cards they need to help them call forth their greatest Fusion Monsters! 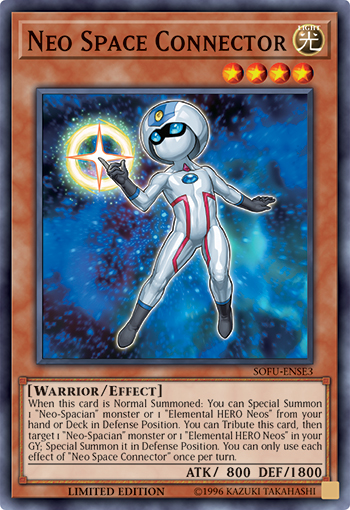 In total, a single Neo Space Connector will let you Special Summon a combination of two Neo-Spacian or Elemental HERO Neos monsters to the field—one from your hand or Deck and one from your Graveyard. That’s a big deal for Neo-Spacian and Elemental HERO Decks. Duelists wielding those Decks count on having multiple monsters at their disposal so that they can combine those monsters in a Fusion Summon. Without the necessary Fusion Materials, Decks that incorporate a Fusion Summoning strategy (like Elemental HERO Decks) are unable to Summon their strongest monsters to the field. By using Neo Space Connector, you can make sure you always have the Fusion Materials you need.

Neo Space Connector gives a big boost to Neo-Spacian and HERO strategies. You can get a Super Rare copy of it in the Soul Fusion Special Edition in stores now!