When it was first released in Flaming Eternity over a decade ago, Sacred Phoenix of Nephthys was one of the most powerful monsters in the Yu-Gi-Oh! TCG. Now, a new member of the Nephthys theme replaces the Sacred Phoenix as the most powerful Nephthys monster ever printed. Nephthys, the Sacred Flame, available in Hidden Summoners, has a bunch of incredible effects, and even though it’s a Link Monster, it derives its extraordinary strength from Ritual Monsters. 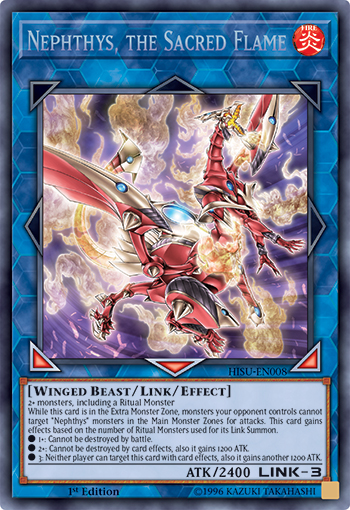 While Nephthys, the Sacred Flame is in the Extra Monster Zone, monsters your opponent controls cannot target Nephthys monsters in the Main Monster Zones for attacks. Then, it gains effects based on the number of Ritual Monsters you used to Link Summon it.

While it’s in the Extra Monster Zone with all of its effects, Nephthys, the Sacred Flame has 4800 ATK, can’t be destroyed by battle or card effects, can’t be targeted by card effects, and protects all of your other Nephthys monsters from attacks. Use three Ritual Monsters to Link Summon it, and it’ll become nearly impossible for your opponent to get it off of your field!

Put Nephthys, the Sacred Flame, from Hidden Summoners , at the heart of your Nephthys Deck and let it lead you to victory!