Sacred Phoenix of Nephthys, released over a decade ago in the Flaming Eternity booster set, was once accompanied only by Hand of Nephthys in the Nephthys theme. Today, Hidden Summoners introduces new Nephthys cards to support the theme, including a brand-new Link Monster—Nephthys, the Sacred Preserver! 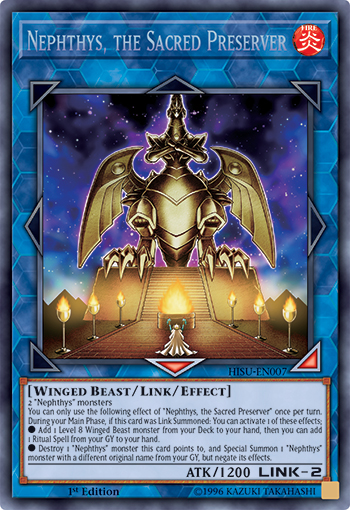 Nephthys, the Sacred Preserver is a Link 2 monster that can be Link Summoned by using any two Nephthys monsters as Link Materials. If it’s Link Summoned, it has two different effects that can be activated during your Main Phase. Only one of those two effects can be used per turn, but both of them interact well with the rest of the Nephthys theme.

The first effect of Nephthys, the Sacred Preserver lets you add a Level 8 Winged Beast monster from your Deck to your hand. Then, it lets you add a Ritual Spell Card from your Graveyard to your hand. This effect can be used to grab the original Sacred Phoenix of Nephthys from your Deck, as well as the new Cerulean Sacred Phoenix of Nephthys Ritual Monster (available in Hidden Summoners). It’ll also let you bring back the Rebirth of Nephthys Ritual Spell Card from your Graveyard so that you can set up your next Ritual Summon.