After discovering an ancient artifact, Lucas holds the world in his hands—literally.

Created by Josh Tierney and Agroshka | MoreLess about World Piece

Lucas Densen has earned his easygoing reputation through hard work and optimism. When not playing basketball for his high school team, the Pulsars, Lucas enjoys visiting his mother’s archaeological excavations. During one visit, Lucas accidentally triggers an ancient alien artifact that suddenly transforms Earth into a small glowing orb no larger than a basketball! Transported to a mysterious realm with nothing but what’s on his back and the planet in his hands, Lucas encounters a friendly alien, Lully, who offers to help. What awaits him in this new realm where worlds are the size of your palm, and can he find out how to restore Earth?

Josh Tierney resides in Ontario, Canada, with his daughter, son and cat, where they consume a steady diet of anime and manga. He is the creator of the fantasy graphic novel series Spera, which was nominated for Eisner, Shuster, Harvey and Diamond Gem Awards, as well as the high school mystery webcomic Warm Blood.

Lucas Densen and his new friends have uncovered an evil scheme to shrink planets for consumption. Yet they still have no idea how to reverse the process and restore Earth. Following a fresh lead, Lucas, Lully, and the mysterious Mitton board a space cruise in search of Dr. Caws, a scientist known to be working on a possible solution. But there are hidden threats lurking on board, and the trio may face more danger than they bargained for! 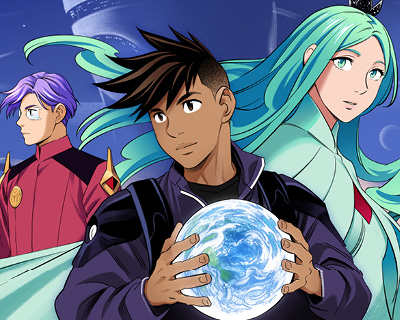 Never miss a new release. Add World Piece to your favorites, and start following it today!