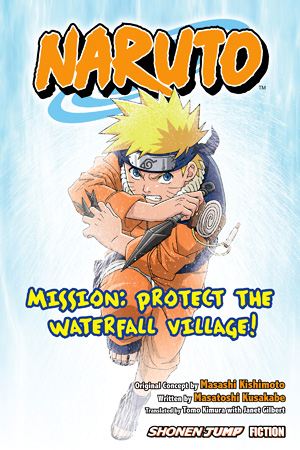 It was supposed to be just an ordinary, C-rank assigment--but nothing about ninjutsu is as simple as it seems...

Squad Seven's latest job is a real snore--escorting a young, cowardly leader named Shibuki back to the remote Hidden Waterfall Village. They arrive without a problem, but get stuck cleaning the village pond! While Naruto and his pals pick up the trash, Kakashi is called back to his home village on urgent business.

Then, without warning, a brilliant rogue ninja shows up in tow with his evil henchmen. Suien desperately desires the Hidden Waterfall's most precious possession, a secret potion called the Hero's Water. And as Squad Seven quickly discovers, the guy will do absolutely anything to get it! With their fearless sensei gone, Naruto, Sasuke, and Sakura find themselves in the most deadly situation of their young lives.

A special Naruto adventure previously available only on DVD--now an action-packed novel!