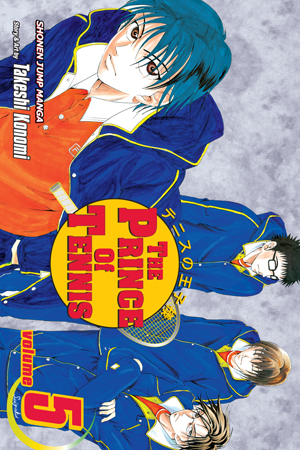 With only one victory away from advancing to the city tournament, Seishun Academy fields the Prince of Tennis, Ryoma Echizen, to compete against the mysterious and mumbling Shinji of the Fudomine Team. As the punishing battle of skills unfolds, Ryoma develops a muscle paralysis called "Spot," which leaves him with barely enough strength to grip the racket, much less swing it. Refusing to go down without a fight, Ryoma unleashes a "two-sword fighting style" technique that only talented, ambidextrous players are able to execute. Will Ryoma have the strength to pull himself out of the ditch and beat Shinji? And what awaits his ex-pro tennis player father, Nanjiro, when a reporter tracks him down? Find out in the next volume of this intense sports manga!