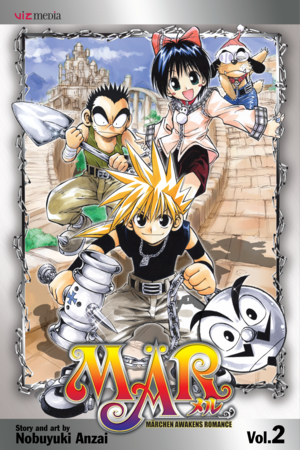 Fourteen-year-old Ginta's journey through the fantasy world of his dreams continues in this volume, where he must battle against the megalomaniacal machinations of the group known as the Chess Pieces!

The Chess Pieces have already tried to take over "Mär Heaven" once before, but they were foiled by a human visitor from Earth. Phantom, the fiendish leader of the Chess Pieces, used the living iron ball known as "Babbo" as a weapon. Now, Babbo has joined Ginta, but because he suffers from amnesia, he has no recollection of his past. However, the Chess Pieces are on the move again, and Ginta and Babbo are expected to make history repeat itself!

The battle against the Chess Pieces commences as the gang is enlisted by an ugly dog (who is not what he seems to be) to rescue a princess who's been frozen in ice. Ginta soon discovers that "Princess Snow" looks exactly like Koyuki, the girl from school he's long had a crush on! Can he be a hero in the face of this frozen beauty?