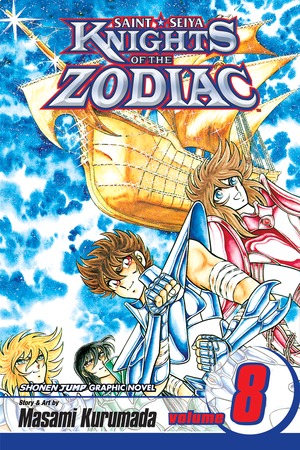 Blinded in his devastating battle against Argol,Bronze Knight Shiryû has retired from fighting to live in peaceful obscurity. But his brief taste of the simple life is snatched away when the vicious Gold Knight Mephisto attacks, forcing Shiryû to once again don the Dragon Cloth. In Siberia, Bronze Knight Hyôga is also trying to forget his life as a Knight--until a mysterious message in the ice forces him out of retirement. The Bronze Knights have been summoned to a war more terrible than anything they have yet encountered: a war against Knighthood itself!

Seiya, too, is called to action. Now he and his fellow Bronze Knights must decide, once and for all, whether to join Princess Sienna in her rebellion against Sanctuary, the headquarters of Knighthood. But the Master of Sanctuary is waiting for them. If Seiya and his friends ever want to find peace again, they must pass through the 12 palaces of the legendary Gold Knights...and defeat them all!