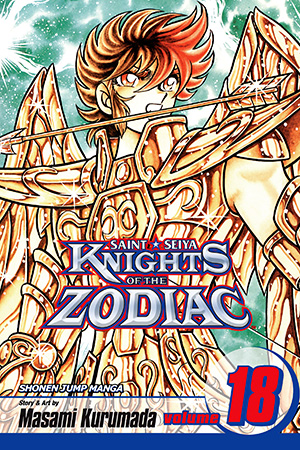 When Julian Solo turned sixteen, he was given a strange golden trident...and became the human incarnation of the sea god Poseidon. Now Poseidon is bent on destroying the world in a flood of mythic proportions. To stop the implacable waters and rescue Princess Sienna, the incarnation of Athena, the Bronze Knights have descended to the bottom of the seven seas!

Having donned the Sagittarius Gold Cloth, Seiya is ready to face Poseidon...or is he? Now fully awakened to his powers, Poseidon can deflect even the Centaur's golden arrow with ease. Only ultimate friendship will allow the Bronze Knights to destroy the undersea pillars and learn the secrets of Poseidon's power. And only ultimate love--and ultimate sacrifice--will save Seiya's life! The Poseidon Saga reaches its shattering conclusion!