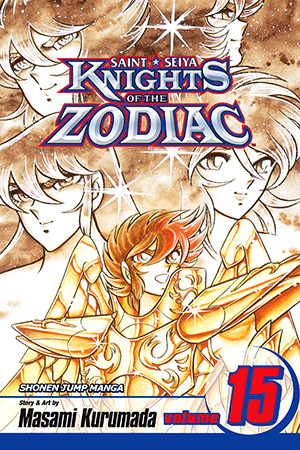 After centuries of peace, the legendary Battle of the Gods rages across the earth once more. Julian Solo, the human incarnation of the god Poseidon, has declared war on all humanity, planning to cleanse the planet with a worldwide flood. To stop him, Princess Sienna, the incarnation of Athena, has offered herself as a sacrifice, only to find herself imprisoned by Solo. In this clash of deities, mere mortals are powerless--except, of course, for the Knights of Athena!

To save Princess Sienna and stop Solo, the Bronze Knights must defeat the guardians of the seven seas and destroy the seven pillars they defend. For Shun, this means facing Skylla, master of illusions--and six deadly attacks, each more powerful than Shun's Andromeda Chains. For Shiryû, it means taking on Krishna, the incarnation of Poseidon's son, whose golden spear can slice through Shiryû's Dragon Shield with ease. The war for which the Bronze Knights have trained has finally arrived. But can even the bravest Knights challenge the gods and live?