Amidst the glitz and glamour of the Big Apple, the biggest superstar at New York Comic Con was none other than manga creator extraordinaire Masakazu Katsura, who was there to promote new multimedia projects Zetman and TIGER & BUNNY. The legendary SHONEN JUMP creator was also SJ Alpha’s guest of honor at our panel and Fan Meet-Up to celebrate his special one-shot Sachie-chan Good!! in the SJ Alpha Yearbook 2013. (The exclusive members edition will ship December 2012!)

But who is Masakazu Katsura? SJ Alpha had the chance to sit down with the enigmatic and charismatic creator for an exclusive interview!

Shonen Jump Alpha (SJA): When and how did you first become interested in becoming a manga creator?

Masakazu Katsura (MK): It was when I was in my second or third year of junior high school. I was into drawing, but I wasn’t interested in drawing manga. I really wanted a stereo system, but my parents never bought me one. So I entered the Tezuka Award for the prize money, and that’s how I became a mangaka. 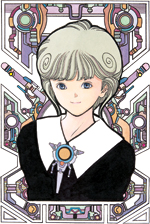 SJA: Shonen vs. seinen manga. What are the challenges?

MK: When I was drawing for Weekly Shonen Jump, it was a very competitive environment with a focus on rankings and popularity. The best kind of shonen manga is something that can be understood and enjoyed by a wide range of readers, from young to old. I really did want to draw more complex storylines, but I still needed to keep different types of readers’ interest every week. Popularity is important to seinen manga too, but even more so for the weekly shonen manga. Once I transitioned to serialization in a seinen magazine, it opened up a wider range of artistic expression that I’ve always wanted take on as a challenge, but it has a narrower range of readership.

SJA: Romantic comedy manga: How did you establish your style? Is it based on your own life experience?

SJA: How is your current series Zetman different from your other series?

MK: Because it’s a seinen manga, the story is a bit more complex. It seems like a superhero series because the title sounds like one, and there’s lots of fighting with monsters. However, I don’t believe in preaching about good vs. evil through my manga, and also there are no real “villains” in this series. My focus for Zetman is based on the human drama and relationship between the two main characters, Jin and Kouga, who come from completely opposite backgrounds.

SJA: How did you feel when you got the offer to be the character designer for TIGER & BUNNY?

MK: Creating character designs and drawing manga are very different from each other. When I was approached by Sunrise about TIGER & BUNNY, creatively, I was interested in doing character design work, but I was also interested in the story premise of a comedic series about a middle-aged superhero. But when I actually got the assignment, the anime production team provided minimal descriptions of eight characters. Other than that, I had no clue what was expected of me. [laughs] It was certainly challenging, but it gave me a lot of creative freedom. 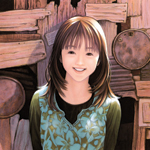 SJA: In your manga, you draw with such precise detail, even your backgrounds. Do you use photo references? Or is it just from your imagination?

MK: I do use some reference photos, but for a science fiction manga setting like my current series, I have to use my own imagination to fill in the details. It actually takes twice as long to draw the background that way for me.

SJA: We’ve heard that you and Akira Toriyama (creator of Dragon Ball Z) are good friends. How did you meet him? Also how would you describe him as a person?

MK: Toriyama and I shared the same editor when we started our careers. Toriyama was already working on Dr. Slump and the editor introduced me to him as a new artist. Since then, we called each other often. He and I talk over the phone about random things other than manga, like what we watched yesterday, the newest movie we saw, or just plain dirty jokes. [laughs] Toriyama is a really normal guy. Everybody knows him as an incredible manga artist, but when you see him in person, he’s really humble, which made me feel comfortable when talking to him.

SJA: Is it true that you came up with the concept of “Fusion” in Dragon Ball Z with Toriyama?

MK: [laughs] It wasn’t actually me who came up with the idea of Fusion. It’s actually true that after making the characters go Super Saiyan, Toriyama was having trouble thinking about new ways to power them up. One time on the phone, we were talking about tokusatsu (special effects) TV shows, and how in one series when the two main characters cross their arms, they turn into one superhero. I suggested, “What about something like that?” But in general, Toriyama never really listens to anybody else’s ideas. Then he came up with “Fusion.” I know for a fact that he wasn’t listening to my suggestion, but he ended up coming up with a similar idea anyway. It’s sort of a confusing story…so as time passed, it grew into that rumor, I guess.

SJA: Your collaboration with Akira Toriyama on the Sachie-chan Good!! one-shot debuts in America in the SHONEN JUMP Alpha Yearbook 2013. What was the process of working with Toriyama?

MK: When the magazine JUMP SQ. launched in Japan, the editors approached Toriyama to draw a one-shot. But at that time, Toriyama wanted to take a break from drawing manga, but he would still consider writing the story. So he told the editor that he would write a story if they could get me to draw the art. I usually draw in a realistic style, but I wanted to change it up for once. So I gladly accepted the offer to try something different, a more cartoony art style to match his style. But once we started, we had to spend hours arguing about the direction of this one-shot. There are both sides to this story, like it says in our interview (also included in the SJ Alpha Yearbook) it was a constant struggle. But in the end, I really like how it turned out because it is a fusion of his style and my style.

SJA: Within three decades of your career, did you ever lose your motivation to create manga? What is your secret to your longevity?

MK: I guess I always do have something that I want to draw. Also just for a change of pace, I like taking on new projects like TIGER & BUNNY to refresh my creativity. 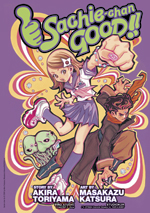 SJA: Do you have any advice for aspiring mangaka?

Don’t read too much manga. [laughs] Personally, I didn’t grow up reading manga, and instead, I was inspired by reading a lot of novels and watching movies. If you continue to just read your favorite manga series and emulate it, it’ll be very difficult to make a manga that surpasses the original. You might as well try out a manga that you don’t like, because once you start to analyze why it works for others, you’ll start to get ideas from that. Also you should have fun in your life. Go out and explore. Experience as many things as possible. Then draw. Just try to draw a manga and show it to people. Thank you!

Sachie-chan Good!! and Katsura x Toriyama interview will be available to SJ Alpha members in December 2012!