Japan is the original nation of foodies. Their love and appreciation for food is on an obsessive level America has only recently begun to explore. If you travel there, you’ll find that even average looking places serve delicious food that’s superior to most American fare. Japan’s almost fetish-level obsession with food produced one of the funniest, wildest and foodiest manga of all time—Toriko!

There have been cooking manga before, even ones where the characters have fantastic powers, but no one’s taken it to the delirious heights that Shimabukuro Sensei has. The Gourmet World Toriko takes place in is a storybook-like fantasy world where cooking and food take on a mythological feel and everything in this world revolves around it.

The world is incredibly biodiverse and filled with innumerable kinds of ferocious monsters of varying powers. Some easy to catch and harvest, others so big and strong they are godlike beings. These monsters are also often delicious, and that’s where the Gourmet Hunters come in. They’re tough guys with superhuman abilities that hunt these dangerous creators for profit or just to eat them. Once captured, chefs who also often have superhuman abilities prepare them. The very food itself can have magical powers! It’s a circle of life like you’ve never imagined! 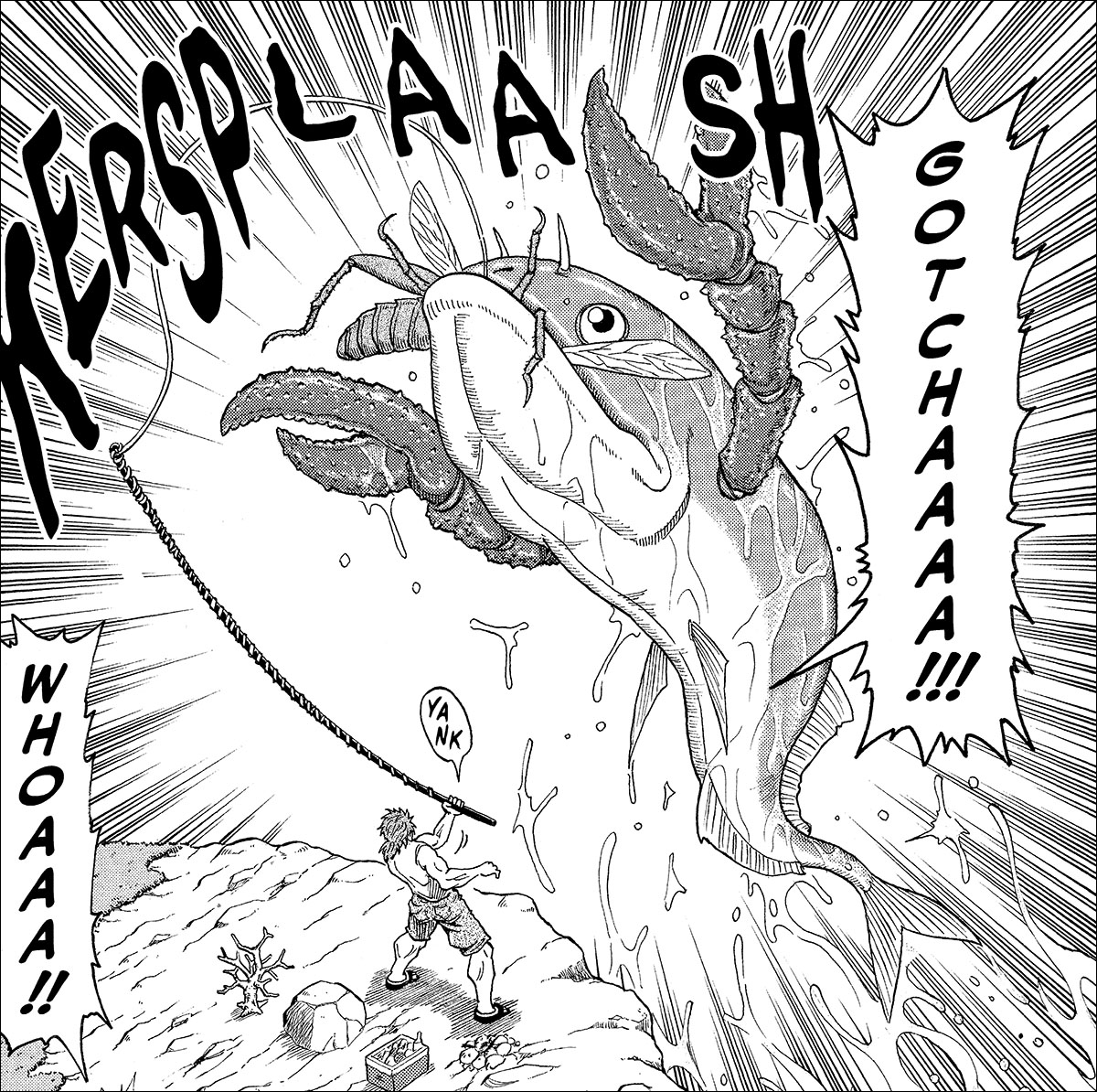 And one of the strongest Gourmet Hunters is Toriko. One of the Four Kings, who along with his teammate, chef and beloved friend, Komatsu, goes on a journey to discover Toriko’s Full-Course Meal. Each slot in his menu is a legendary ingredient that can only be obtained through a perilous adventure that will take them all around the world. But along the way, a deeper plot is revealed by evil food organizations—Gourmet Corp. and NEO—that threaten the entire Gourmet World.

In celebration of the final volume 43 coming out recently, I asked the editors of the English-language version and the Weekly Shonen Jump editors who have read the entire series what their favorite things about it were. Here’s what they said!

I love so many things about Toriko!!! I love that fans got to send in their own ideas for crazy creatures. Many of the food/monsters in the series were submitted by Japanese fans. They would write in their ideas, Shimabukuro Sensei would pick the ones he liked and draw them into the manga. And there would be a note next to the panel of their name and where they were from. It's such a cool idea!

Another thing I love about this manga is everybody’s soooooo buff! The body types in this manga harken back to manlier days of Weekly Shonen Jump manga when everybody was MAJORLY RIPPED. It reminds me of Fist of the North Star or even the very early JoJo’s Bizarre Adventure super buff guys. Zebra is an especially manly man design. BIG GUNS = BIG FUN! 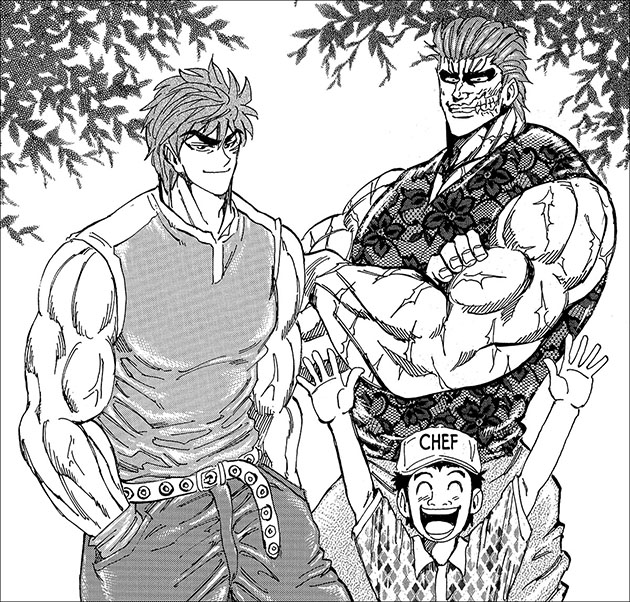 Also, Toriko's a lot like a big video game. In the manga, the weak monsters are easy to kill and their levels aren’t even worth mentioning. But the big monsters are given levels to show how tough they are. The Garara Gator, one of the tough monsters in the beginning, is only level eight. But as the series progressed, the numbers got higher as the monster grew stronger until they were downright outlandish in terms of power. And as they grew in power, the characters did right alongside with them becoming legends in their own right. Plus, the adventures the characters go on feel like game quests as they're trying to gather legendary food that usually requires them to travel to dangerous lands and fight some kind of final boss monster. Much of the series feels like a really fun JRPG. 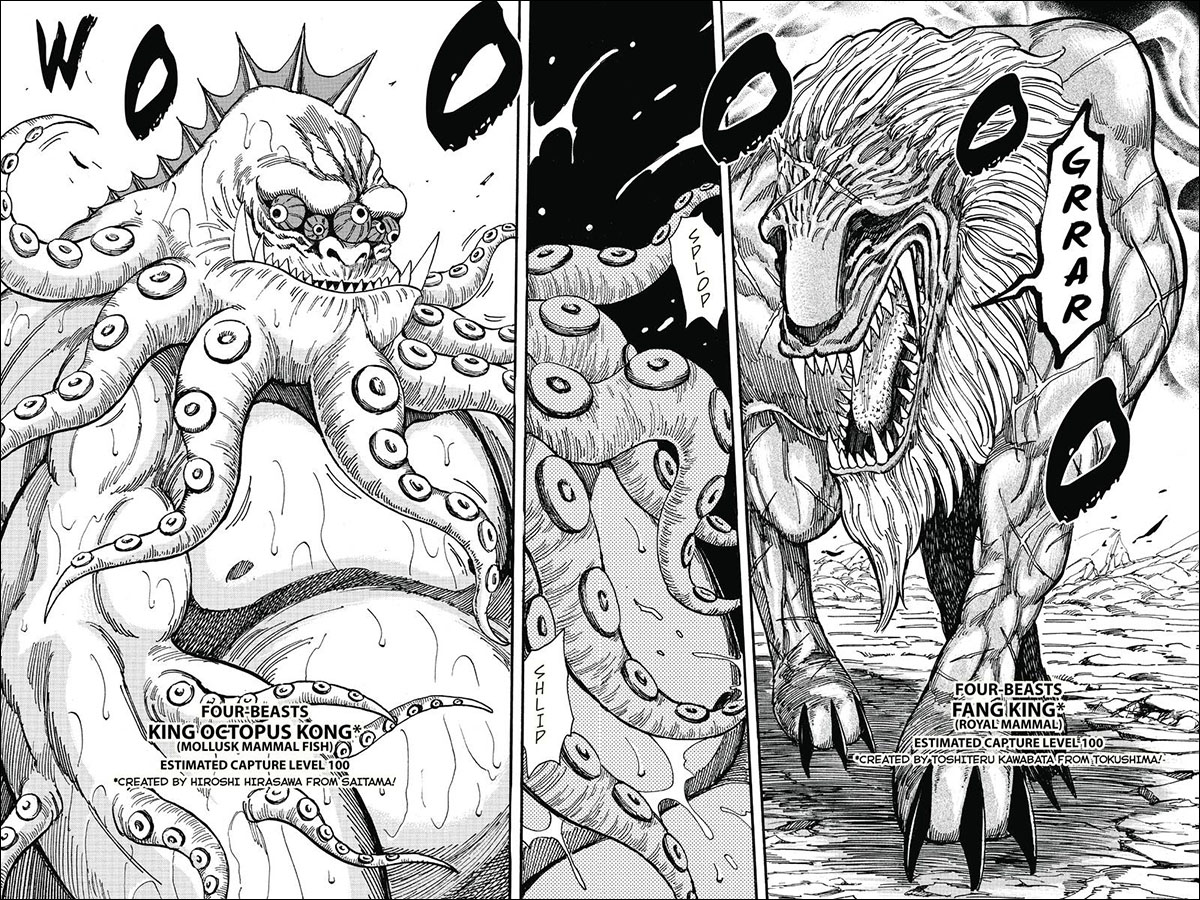 Speaking of monsters, Shimabukuro Sensei is in a master class of his own in terms of coming up with cool and scary-looking beasts. And fusing food with monsters making for some hilarious creations. The sheer amount of monsters he designed is staggering. There are 43 volumes of Toriko and each one is packed with crazy-looking beasties. His creativity seems absolutely limitless!

There are so many funny things about Toriko! From monkey balls to butt bugs to drinking tears straight from the Sphinx's eyes! After some long and hard thinking, I think I know what was the most memorable for me...Mappy! I mean, we're talking about a super happy frog...with a Fu-Manchu mustache...that can cook...and drives a car named the Croaksmobile! Top that! 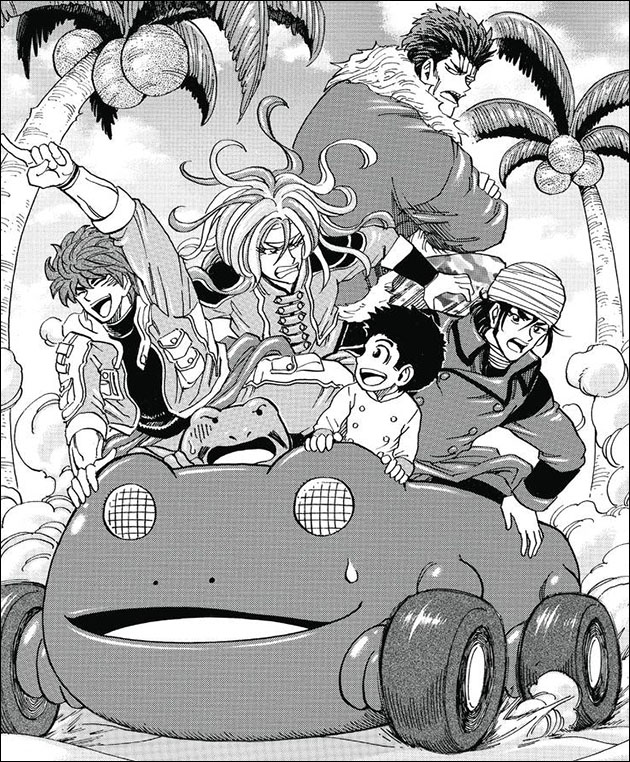 As the editor who started Toriko, the series will always have a special place in my heart. I remember reading the first few chapters and thinking, "Is this a cooking manga? A comedy manga? A fighting manga?" Soon I would learn that it was all that and more, much more! Many of the foods and animal names were based on puns, so the series was quite challenging to work on, but it was also rewarding. Even though I had to eventually pass Toriko on to other editors, it will always remain my special baby...my hulked-out, cigar-smoking, gator-punching baby! 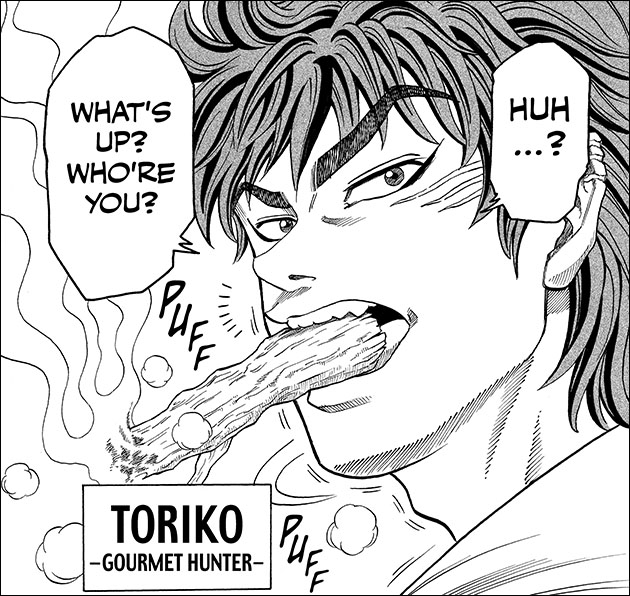 Toriko has the best bananas. If I am hungry and it's morning, I can have a regular banana…not! There are ZERO regular bananas in Toriko’s world!! They are all way cooler bananas. First, there is a Banana Cucumber that is fresh and a Roast Banana that is meat. There are Electric Bananas for bad people. There are Calorie Bananas and Bana-Natto too. In conclusion, Toriko is bananas! 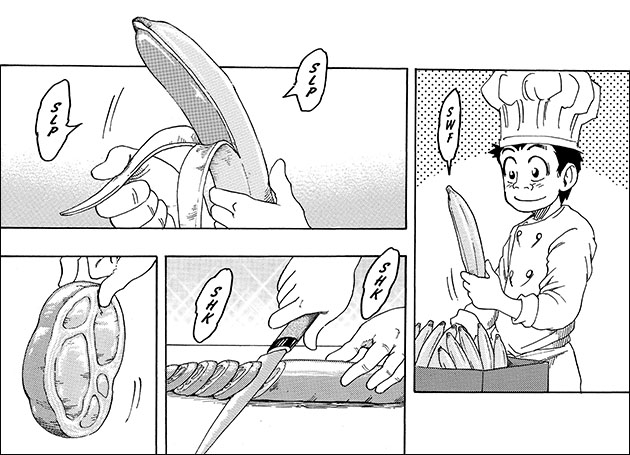 Toriko was one of the first series I edited at VIZ and it has been one of the highlights here so far. Each week, I would look forward to the next chapter as the series got more and more exciting and I was really sad when it ended. It left a big void in my manga-reading life! I think Shimabukuro Sensei really built the world of Toriko up to incredible heights. What started as a comedy, became more and more grounded in a serious, emotional plot of family ties and a fight between good and evil. Even in Toriko's most comedic moments, I still remember those times when the manga made me cry. The character growth of characters such as Star Jun and Midora was incredibly moving and even characters that are seemingly comedic (like Don Slime) still made an impact on the story. Toriko is one of my favorite Shonen Jump series and it was truly an honor to help bring it to English readers. I can't wait to see what Shimabukuro Sensei comes up with next! (Like fighting, talking, magical houses!) 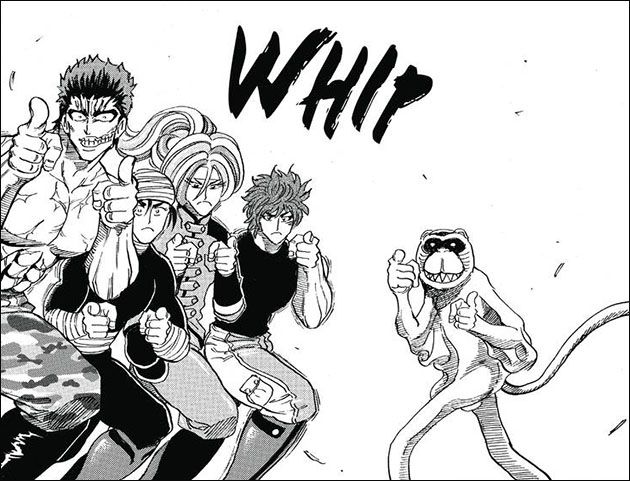 Toriko is a manga like no other, a true original. It takes food fighting to the ultimate level of insanity! A fusion of muscles, meals and monsters you'll never forget!