In a world full of zombies, Akira has never felt more alive.

Created by Haro Aso and Kotaro Takata | MoreLess about Zom 100

After spending years working for a soul-crushing company, Akira’s life has lost its luster. But when a zombie apocalypse ravages his town, it gives him the push he needs to live for himself. Now Akira’s on a mission to complete all 100 items on his bucket list before he...well, kicks the bucket.

In 2004, Haro Aso received Shonen Sunday’s Manga College Award for his short story “YUNGE!” After the success of his 2007 short story “Onigami Amon,” Aso got the chance to start a series of his own—2008’s Hyde & Closer. In 2010, his series Imawa no Kuni no Alice (Alice in Borderland) began serialization in Shonen Sunday S. Zom 100: Bucket List of the Dead is his follow-up series.
Add favorite  Favorited Manga trailer

Akira and the gang head out to save the world. Their goal? Hokkaido and the northernmost tip of Japan. Why? Because they feel like it. Unfortunately, they run out of gas 246 kilometers short of their destination. Can an item on their bucket list save the day? Later, the gang find themselves in a luxurious but strange hotel. Will their wild and extravagant party be their last? 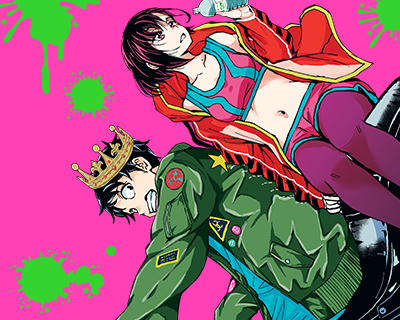 Never miss a new release. Add Zom 100 to your favorites, and start following it today!