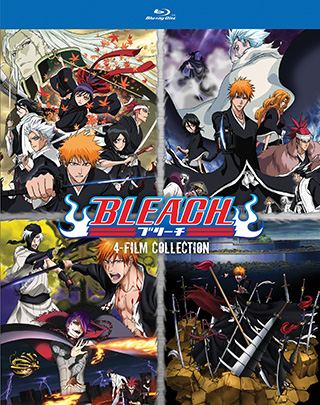 After unidentified beings known as “Blanks” start popping up, they are soon followed by a Soul Reaper named Senna who makes them disappear. Puzzled by these unknown beings and the even more mysterious girl, Ichigo and Rukia set out to learn more, but uncover an evil plot when a menacing clan tries to kidnap Senna. Banished from the Soul Society long ago, the clan’s leader is sending the World of the Living and the Soul Society on a collision course, and Senna seems to be the key to his diabolical plot for revenge. Can Ichigo and his fellow Soul Reapers save the two worlds from annihilation?

After the treasured Ouin is stolen, Toshiro Hitsugaya disappears and becomes suspected of treason. When the Soul Society calls for his capture and execution, Substitute Soul Reaper Ichigo Kurosaki vows to prove Hitsugaya’s innocence. Will the secret of the Ouin and Captain Hitsugaya’s motives be revealed before his honor, his life, and the Soul Society are destroyed?

A strange disturbance in the World of the Living sends Ichigo and Kon to the Soul Society, where the Seireitei has been devastated by an explosion of reishi and Rukia is missing. Stranger still, none of the Soul Reapers remember Ichigo, and they think he’s the one responsible for the destruction. Now on the run, Ichigo is forced into a lonely battle in order to find Rukia and stop the real culprits!

Hell—a place where beings that have committed mortal sins during their lifetime are sent. It is a realm where even Soul Reapers are forbidden to interfere.

When a group of vicious Sinners plots to escape from this eternal prison, they discover that Substitute Soul Reaper Ichigo Kurosaki is the key to their freedom. The Sinners launch an attack, and in the process kidnap Ichigo’s younger sister Yuzu and take her to Hell. With the help of a mysterious man named Kokuto, Ichigo and his friends must now travel into the depths of Hell to stop the Sinners and save Yuzu, unaware that their actions could bring Hell to the World of the Living.