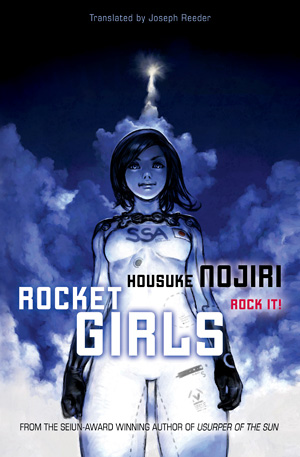 Yukari Morita is a high school girl on a quest to find her missing father. While searching for him in the Solomon Islands, she receives the offer of a lifetime--she'll get the help she needs to find her father, and all she need do in return is become the world's youngest, lightest astronaut. Yukari and her half sister Matsuri, also petite, are the perfect crew for the Solomon Space Association's launches, or will be once they complete their rigorous and sometimes dangerous training.

Two years earlier, before coming to the islands, Haruyuki had been a test pilot in the Japan Air Self-Defense Force. He was stationed in Hamamatsu where he flew experimental Control-Configured Vehicles, or CCVs. All that changed when his commanding officer called him in and asked if he wanted to be an astronaut.

The Solomon Space Association was a new program continuing the work of the former National Space Development Agency of Japan and the Institute of Space and Astronautical Science, and they were about to begin manned-flight operations. The SSA was a local endeavor, operating solely within Solomon Islands territory, or so went the official line. In reality, it was financed with Japanese cash and staffed almost exclusively by Japanese nationals.

Since members of the Japan Self-Defense Force are not generally allowed to serve overseas, Haruyuki had to be temporarily discharged from the service before he could work for the SSA. There would be risks, he knew, but they were risks he was willing to take for a once-in-a-lifetime chance.

“If this launch fails, I’m going back to Hamamatsu.”

“If they’ll still have you.”

“It’s time,” interrupted the flight director without looking up from his screen. He flicked on his mike. “T-minus ten minutes. All personnel clear the launch pad!”

Ten kilometers away, the voice from the loudspeaker reached a small village in the jungle. The village stood on the slopes of one of the Shiribas, a line of jagged peaks that crossed the island from northwest to southeast. A handful of huts and towers stood around a crude square at the village center.

Each of the huts had a log frame and banana-leaf roof. The floors were raised a full meter off the ground to distance them from the scorpions, snakes, and poisonous ants that teamed on the jungle floor. Walking around barefoot was one thing, but even the locals, who called themselves the Taliho, slept better with a good meter of open air between them and the local fauna. The floor of the chief’s hut extended past its walls, forming a balcony that encircled the structure. Baskets and water jugs lined the balcony atop a rug of woven coconut fibers.

The chief sat on the rug with one of his many daughters, Matsuri. Her sharp ears had no difficulty picking out the announcement against the backdrop of birdsong and screeching beasts.

“T-minus ten,” she announced to her father.

“Ten minutes until the fireworks.”

“We will see them from here?”

“Woo!” Her face glowing, Matsuri rose and leapt from the balcony. A grass skirt and woven bikini top were all that covered her sun-bronzed skin. She was much lighter than the dark-skinned Melanesians, and her chest-length hair fell straight. The Melanesians wore their hair short and kinked.

Matsuri beat the large talking drum at the center of the village, calling her friends to gather. “Fireworks soon! Fireworks soon!”

People streamed from the fields and dense jungle surrounding the village square. Most of the adults were dark-skinned locals, but many of the children had skin the same lighter color as Matsuri’s. Everyone wore grass skirts and ornaments made from shells or animal fangs, and little else.

A ripple of excitement passed through the crowd.

“The fireworks are starting! Hurry up!”

“The Japanese are shooting their fireworks.”

“It’s been a while since the last one.”

“Think this one will go high?”

“Last time was all smoke, no fire.”

“I hope there’s a big fireball this time.”

Their chief had explained that the Japanese used fireworks to put things up in the sky. Sometimes the fireworks flew so high they could no longer see them, but more often they burst into a ball of flame—much to the villagers’ delight.

The adults watched from the square while the children perched in the towers like so many bells. They watched and waited.

Without warning, a pillar of white smoke rose beyond the trees. An orange flame burned at the head of the column, topped by a small silver cylinder. Then came a roar like thunder, sending birds flying from the trees. The silver cylinder sped skyward with incredible power, followed after a forty-five second delay by the terrible roar of its ascent.

“Go! Go! Go!” the villagers cheered with delight. They clapped their hands; they stomped the ground; they beat on drums and sticks of bamboo.

For a moment, a flash as bright as the sun lit the sky, then faded to reveal bits of metal trailing white smoke, scattering like strips of paper in a tickertape parade.

“That was the best one yet!”

Shouts of exultation rose throughout the village.

The chief called down from his balcony. “No work! Today, we feast! We have drink and wild boar! So light the bonfire, and make it big!”