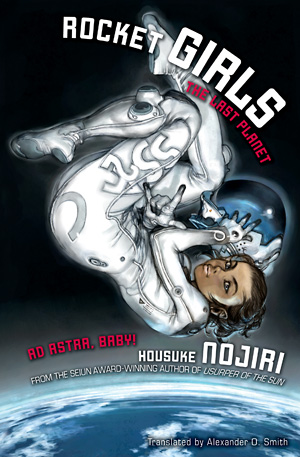 When the Rocket Girls accidentally splash down in the pond of Yukari Morita's old school, it looks as though their experiment is ruined. Luckily, the geeky Akane is there to save the day. Fitting the profile--she's intelligent, enthusiastic, and petite--Akane is soon recruited by the Solomon Space Association. Yukari and Akane are then given the biggest Rocket Girl mission yet: to do what NASA astronauts cannot and save a probe headed to the minor planet Pluto and the very edge of the solar system.

Compared to these two, I’m like one of those walking stuffed animals at Disneyland, Norman thought.

The two other astronauts looked frighteningly small and thin to the American. Their waists were barely bigger around than one of his arms in the spacesuit. And what's more, while he looked like the Michelin man, they were shapely. You didn't expect to see curves like that in the payload bay of a space shuttle flying at 300 kilometers above the surface of the Earth.

Their golden reflective visors were up, so she could see their faces—like dolls, he thought.

"The valve assembly is inside there. See the gap on the engine side in the center of the ring?"

"So it's in there, just behind the helium tank, right?" Akane asked.

"All right, well, be careful. Every single tank in there is dangerous."

"Shall we get started, Akane?" Yukari asked. "Let's go in and check things out first. Take it easy. It's more tangled in there then it was in the CG simulation."

Akane was getting used to extravehicular activity by now. In the skintight spacesuit she wore, it was hardly any more difficult than scuba diving. But Yukari was right. Compared to the training video they had seen, the real engine structure had all kinds of small protrusions here and there. This wouldn't be easy.

Akane slid inside the truss.

"A little more to the left, Akane."

"My head is close to the center now. I'm going to try swiveling." A few moments later, Akane reported that she'd found the valve. "It's about another meter in there —huh?"

"My backpack's hung up on something."

"Ack. It's another fifty centimeters or so."

"I'm coming." Akane pushed herself out feet first. Norman could see beads of sweat on her face.

"There's something sticking out halfway in, about the size of a fist. I keep getting hung up on that."

"Would a tool work?" Norman asked. "We have a probe, it's about the same size as a back scratcher."

"No, a straight probe won't work. There are too many twists."

"Wait, I know how I can do it." Akane said suddenly. "I'll take off my backpack."

"What?" Norman gaped. "Did you just say you're going to take off your backpack?"

"You can’t take your backpack off! That's like instant death!"

"No it's not," Yukari said. "Our backpacks have quick disconnect valves on them. You can remove them in a vacuum and not lose any air."

"But the air inside your helmet won't last more than a minute!"

"That's nothing for a skin diver. I'll be in and out in a flash."

"But what if you got caught on something —"

"Don’t worry. I can do this. Akane, you guide me from here."

"We won't be able to communicate, you won't have your transmitter."

"I'll increase my oxygen and saturate before I go in. I should be good for three minutes. If I don't come out before then, haul me out with a lifeline."

Yukari stared at Akane's face through her visor

Those eyes—like still water. She can do this. "Okay. Go for it."

"Whoa, Captain, you hearing this? I don't think we can let them—"

Wayne cut off Norman’s protest. "Yukari, I'm not sure what SSA safety standards are like, but the danger of this operation is unprecedented. Are you sure you can just let her go in there?"

"Actually, at the SSA, we switch backpacks outside the ship all the time. If you just think of this as an extension of that, it's really no big deal."

"It's no more dangerous than the skin diving, captain. Do they not allow skin diving in America?"

There was a long pause before the captain responded.

"Fine, we'll just have to trust that you know what you're doing."