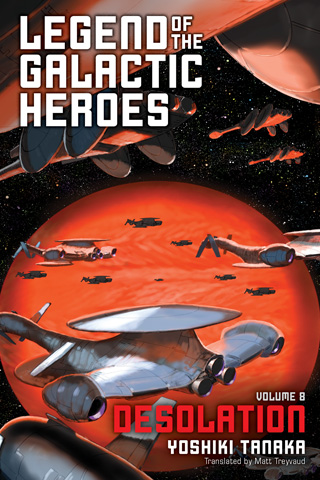 After utterly defeating the Free Planets Alliance, Kaiser Reinhard has brought 99 percent of inhabited space under his control. Still, dissatisfaction and unease coil within his breast, for the galaxy's last remaining sliver of free territory is defended by none other than Yang Wen-li. Seeking decisive battle, the Imperial Navy moves to attack Iserlohn Fortress, but due to Yang's unexpected plan, the battle has already begun before Reinhard arrives. The Yang Fleet must overcome an enormous difference in force strength—while at the same time, a trap laid by the Church of Terra is closing in around Yang…

At 0630 on May 3, SE 800, year 2 of the New Imperial Calendar, the Galactic Imperial Navy began its entry into Iserlohn Corridor under the direct command of Kaiser Reinhard. Even after losing more than a million souls in the first skirmishes of the battle, the imperial forces still numbered 146,600 ships and 16.2 million officers and men, with more in reserve at the rear—specifically, 15,200 ships under the command of Senior Admiral August Samuel Wahlen, currently stationed between the corridor and the former alliance capital Planet Heinessen. Yang Wen-li’s fleet, on the other hand, was already down to fewer than 20,000 ships. In terms of sheer numbers, the two sides simply bore no comparison.

Kaiser Reinhard was on the bridge of the fleet flagship Brünhild, where the viewscreen showed the Imperial Navy vanguard clearing mines as they advanced.

The “Silent Commander,” Senior Admiral Ernst von Eisenach, had been chosen by the kaiser to lead the strike force that would follow.

“These orders are the greatest honor a warrior could possibly receive. I shall spare no effort to carry out Your Majesty’s wishes, and if those efforts should be insufficient I shall apologize with my life. Sieg Kaiser!”

...is what Eisenbach did not say, instead making only a deferential, silent bow before leaving the kaiser’s presence.

One by one, the other admirals received their orders and set off to their posts. Wittenfeld, who had tasted the bitter chalice of defeat in the first engagement, was given temporary command of the former Fahrenheit Fleet in addition to his own, giving him almost twenty thousand ships in total. The implication was as clear to Wittenfeld as it was to everyone else: the kaiser had high expectations of the ferocious commander’s burning desire for revenge.

Neidhart Müller, youngest of the senior admirals, was assigned to guard the rear. He had played this role at almost every stage of the kaiser’s Great Campaign since its commencement the previous year. The truth was that the Imperial Navy simply could not eliminate the uncertainty that lay in its wake as it advanced across the galaxy. Behind them stretched a vast territory that had once belonged to their now-defeated enemy. If organized rebellion should arise, it might be beyond the ability of even the seasoned Wahlen to put down. In such a case, Müller would turn back from the battlefield and cooperate with Wahlen to secure the widest possible route back to the empire’s home territory for the rest of the fleet. He was also responsible for defending against enemy attack from the rear, although that seemed impossible in their present situation.

The man who had been entrusted with the vanguard and tasked with cleaning the minefield as he plunged into the depths of the corridor was Vice Admiral Rolf Otto Brauhitsch. It was a grueling operation of more than half a day, but he completed this assignment eventually.

Brauhitsch had formerly served under Siegfried Kircheis. After Kircheis’s death, he had come under the direct command of Reinhard. Whether on the front lines or at the rear, his ability to deal with situations as they arose was first-rate, and his meticulous advance preparations and decisive leadership in battle belied his youth. Sometimes, however, he was accused of forgetting the preparations he himself had made and rushing in blindly. Perhaps it was simply that while his bravery was inborn, his attention to detail was the fruit of conscious effort.

At 2100 on May 3, Brauhitsch fired his first volley at the Yang Fleet. Return fire tore through the dark void toward him precisely fifteen seconds later. Points and beams of light multiplied by the half second until his screen had become a vast, rippling curtain of light.

From this moment on, Iserlohn Corridor was a dizzying kaleidoscope of devastation and slaughter.

In short order, the Brauhitsch Fleet was taking concentrated fire. Worse yet, the minefield behind them made retreat all but impossible.

This was all as expected—indeed, part of their strategy. Brauhitsch car- ried out the instructions he had received from the kaiser and divided his 6,400 ships into squadrons of one hundred to avoid the concentration of enemy fire, but the fleet took no little damage while executing this maneuver. With walls of fire and light penning them in both fore and aft, the vanguard of the Imperial Navy had been forced into a perilous position.

At 0220 on May 4, secretary-general of Supreme Command Headquar- ters Marshal von Reuentahl ordered the commencement of the operation’s second phase.

The release of directional Seffl particles began. The minefield was run through by five invisible pillars of cloud, which when ignited became five vast dragons of flame dancing in the void. It was both a magnificent sight and a ferocious manifestation of the terror within that very magnificence. Eventually the dragons burned themselves out, leaving five tunnels through the minefield like the fingers of some colossal god that had seized the dragons and crushed them.

When they emerged into the corridor, the former alliance forces quickly showered them in fire, and many exploded into balls of flame. However, it was impossible to maintain suppressive fire on five entrances at once—and, above all, the cruisers were a diversion. While the Yang Fleet’s attention was focused on the five tunnels, the Imperial Navy’s main forces were making their entry through the path that Brauhitsch had so painstakingly cleared into the corridor proper.

After two hours of pitched battle, the imperial military finally established what might be called a bridgehead within Iserlohn Corridor.

The pure-white form of Kaiser Reinhard’s flagship Brünhild emerged into the corridor at 1200 on May 5, and the Yang Fleet’s communications channel filled at once with vocalized tension and anxiety.