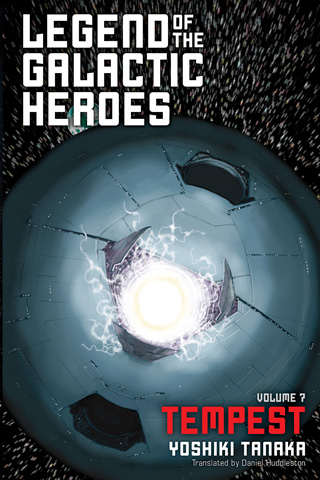 Reinhard, under his Golden Lion banner, is setting out to bend history and the universe to his will. Meanwhile, with no flag of their own to raise, Yang and his compatriots have escaped the murderous hands of the Free Planets Alliance's government and dubbed themselves the “Irregulars.” Yang receives word that an Imperial fleet is closing in on the capital of Heinessen, and in a daring move, recaptures Iserlohn Fortress. In the meantime, Reinhard’s invasion of the Free Planets Alliance proceeds steadily apace. Standing in the path of the Imperial fleet is a fleet of FPA Navy vessels commanded by the elderly Admiral Bucock. An old lion roars out a life-or-death challenge, and a young lion answers it—the final battle of the Free Planets Alliance now begins!

On January 12, leading the entire fleet that was under his command, Lutz departed from Iserlohn Fortress. The fleet was composed of more than 15,000 vessels, and the embarkation of this stately swarm of light flecks was picked up by the Yang Fleet right away—though since this was being done for show, that was only natural.

On January 13, that report from Bagdash was greeted with cheers and whistles among the crew of the Yang Fleet. Another of “Yang Wen-li’s miracles” was on the verge of coming to pass, and it was how well theyfought that would determine whether or not it came true. Voices rose up calling for an advance celebration, and in no time bottles of whiskey were passing from hand to hand, each soldier drinking in turn.

In the midst of such a cheerful, fearless crew, not even calm, imperturbable Merkatz—whom some even called “the Yang Fleet’s only gentleman”—could maintain the dignified aloofness of his imperial days. Although he just touched his lips to the drink for appearances’ sake, when he awkwardly raised aloft a small flask of whiskey, the applause and the cheers grew even louder, and that was when he opened his mouth with something important to say.

“We have Lutz acting in accordance with our plan, but Lutz must also think that he has us acting according to his plan. He is an outstanding tactician, and the fleet he commands is ten times the size of ours. Unless we can gain control of the fortress before he turns around and overwhelms us, our chance for victory will be lost forever. The battle to capture the fortress will commence immediately. Vice Admiral von Schönkopf, I’d like to ask you to command the front line.”

“You can rest assured, Admiral. Just leave it to me.”

Von Schönkopf saluted, showing not a hint of apprehension. In that year of SE 800, he would turn thirty-six, a graceful gentleman in his prime. Watching him, Julian was remembering Yang’s explanation of the plan to capture the fortress.

“…Lutz is a fine admiral. He understands just how important Iserlohn is, so even if the kaiser orders him to mobilize, it’s possible that he’ll stay put and beg him to reconsider. And even if he departs Iserlohn per the kaiser’s command, there’s no telling when he might catch on to our plan and turn back. That’s why we’re letting him know up front what our plan is. If he sits there and doesn’t mobilize, there’s nothing we can do, but depending on how we leak the intel, we can probably make him think that he’s catching us in a trap. And to catch us in that trap, it will be necessary for him to be a certain distance away from the fortress. The farther away he moves, the easier it gets for our plan to succeed. You may think I’m relying too much on cheap tricks, but cheap tricks are what we need… so that Lutz can see through them…”

Lutz fell splendidly into Yang’s trap. At that time, the orthodox tactician—who under normal circumstances would have led a large force and an impregnable fortress to crush Yang’s group head-on without resorting to stopgap tricks—was 800,000 kilometers from port, watch­ing on the screen of his flagship as the Yang fleet bore down on the fortress.

“They’ve fallen for it, those wandering bandits.”

Kornelias Lutz was hardly what might he called a frivolous man, but just this once, he couldn’t contain the joy that was bubbling up inside him. At long last, Yang Wen-li, that living treasure trove of trickery and ingenious plans, was about to become ensnared in his own trap, and the knee of the Imperial Navy would soon weigh heavily against his neck.

His joy, however, was not to be long-lived. Though he waited and waited, the white column of Thor’s Hammer—the fortress’s main cannon, capable at any moment of erasing those impertinent enemies from the sky at point-blank range—never roared forth. The commanding officer’s eyes were locked on the screen, while behind him, his staff officers were exchanging uneasy and suspicious glances.

“Why isn’t Thor’s Hammer firing?” Lutz shouted. A nervous, agitated sweat dampened the brow of the Imperial Navy’s intrepid admiral. His carefully timed, intricately constructed plan was beginning to collapse like a wall of sand.
###

On the other side of an 800,000-kilometer void, the tension inside Iser­lohn Fortress had rapidly grown into worry, followed by panic. Operators flooded the comm channels with a mixture of screams and curses, and their fingers raced vainly across their keyboards as though they were amateur pianists.

“Control is not possible!”

Their cries resounded against one another. Numerous transmissions had been broadcast from the rapidly closing Yang Fleet. One of them that Iserlohn’s computers picked up was a string of words no operator could have considered a normal transmission—“For health and beauty, have a cup of tea after every meal”—and in that instant, all defensive systems immediately went down.

Vice Admiral Wöhler, entrusted by Lutz with the vital mission of defending the fortress, could feel something akin to a toothache shooting through his mental circuitry. The sense of victory he had felt up until a moment ago had been purged from his body, replaced by the oppressive weight of a nightmare presaging doom.

“Break off computer control and switch over to manual! Fire Thor’s Hammer at all costs!” The orders caught in his throat, and wouldn’t eas­ily leave his mouth.

Despair transformed into sound, and leapt from the operator’s mouth.

Understanding and terror invaded Vice Admiral Wöhler’s right and left lungs, and finding it increasingly hard to breathe, he sat there frozen in the command seat.

That keyword for disabling the fortress defenses had been the seed of Yang Wen-li’s magic trick—one he had planted one year ago, when he had fled from the fortress. Even so, what an absurd pass phrase! For his part, Yang felt he had worked very hard to come up with an utterance that carried no risk of being used in Iserlohn’s official transmissions dur­ing the next few years—although not even he could have put up a strong argument for it in terms of stylishness and taste.

Clearly, there had to be another phrase to unlock the systems, but as a practical problem, discovering it was an impossibility.

When the Imperial Navy had recovered Iserlohn, a large number of ultra-low-frequency bombs had been discovered. It had been believed that the fleeing Free Planets’ forces had tried and failed to detonate the fortress. However, when he thought about it now, that had actually been an exceedingly clever feint, designed to divert the Imperial Navy’s eyes from the real trap.

“The enemy is about to storm the port!”

“Close the gates! Don’t let them inside!”

Although the order was given, the reply was not hard to guess. When he heard the operator’s cry that the gates couldn’t he closed, Wöhler stood up from the command seat, and gave the order to prepare for hand-to-hand combat. The air inside the fortress vibrated with the sound of alarms.