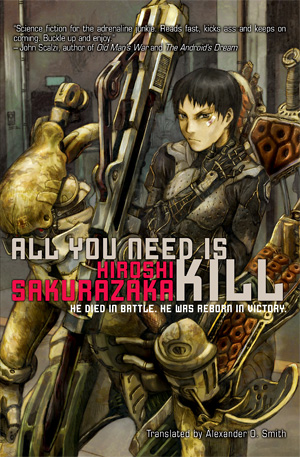 When the alien Mimics invade, Keiji Kiriya is just one of many recruits shoved into a suit of battle armor called a Jacket and sent out to kill. Keiji dies on the battlefield, only to be reborn each morning to fight and die again and again. On his 158th iteration, he gets a message from a mysterious ally--the female soldier known as the Full Metal Bitch. Is she the key to Keiji's escape or his final death?

All You Need Is Kill - Excerpt

I'd heard stories. A war junkie always chasing the action, no matter where it led her. Word had it she and her Special Forces squad from the U.S. Army had chalked up half of all confirmed Mimic kills ever. Might be anyone who could see that much fighting and live to tell about it really was the Angel of Death.

Still carrying the battle axe, the blazing red Jacket started toward me. Its hand reached down and fumbled for the jack in my shoulder plate. A contact comm.

"There's something I've been wantin' to know."

Her voice filled my suit, clear as crystal. A soft, light tone, at odds with the two-meter axe and carnage she'd just created with it.

"Is it true the green tea they serve in Japan at the end of your meal comes free?"

The conductive sand spilling out of the fallen Mimic danced away on the wind. I could hear the distant cry of shells as they flew. This was a battlefield, the scorched waste where Yonabaru, Captain Yuge, and the rest of my platoon had died. A forest of steel shells. A place where your suit fills with your own piss and shit. Where you drag yourself through a mire of blood and muck.

"I've gotten myself in trouble for believing everything I read. So I thought I'd play it safe, ask a local," she continued.

Here I am, half dead, covered in shit, and you want to talk about tea?

Who walks up to someone, kicks them to the ground, and then asks about tea? What was going through her fucking head? I wanted to give her a piece of my mind, but the words wouldn't come. I could think of the words I wanted to say, but my mouth had forgotten how to work—a litany of profanities stalled at the gate.

"That's the thing with books. Half the time the author doesn't know what the hell he's writing about—especially not those war novelists. Now how about you ease your finger off the trigger and take a nice, deep breath."

Good advice. It took a minute, but I started to see straight again. The sound of a woman's voice always had a way of calming me down. The pain I'd left in battle returned to my gut. My Jacket misread the cramps in my muscles, sending the suit into a mild spasm. I thought of the dance Yonabaru's suit did just before he died.

"What do you think?" My reply wasn't much more than a hoarse whisper.

The red Jacket kneeled down in front of me, examining the shredded armor plate over my stomach. I ventured a question. "How's the battle going?"

"The 301st has been wiped out. Our main line fell back to the coast to regroup."

"What about your squad?"

"No use worrying about them."

"It pierced the front, but the back armor plate stopped it. It's charred bad."

"Fuck me." I looked up at the sky. "Looks like it's starting to clear."

I felt tears well up in my eyes. I was grateful then that the helmet hid my face from view. It kept my shame a private thing.

The red Jacket maneuvered to gently cradle my head. "What's your name? Not your rank or your serial number. Your name."

"I'm Rita Vrataski. I'll stay with you until you die."

She couldn't have said anything I'd rather hear, but I wasn't going to let her see that. "You'll die too if you stay."

"I have a reason. When you die, Keiji, I'm going to take your Jacket's battery."

I heard an electronic squelch—an incoming comm signal in Rita's helmet. It was a man's voice. The link between our Jackets automatically relayed the voice to me.

"Calamity Dog, this is Chief Breeder."

"I read you." All business.

"Alpha Server and vicinity under control. Estimate we can hold for thirteen minutes, tops. Time to pick up that pizza."

The red Jacket stood, severing our comm link. Behind her an explosion rumbled. I felt the ground tremble through my spine. A laser-guided bomb had fallen from the sky. It plunged deep into the earth, piercing the bedrock before it detonated. The sandy white ground bulged like an overcooked pancake; its surface cracked and sent darker soil the color of maple syrup spewing into the air. A hail of mud splattered on my armor. Rita's battle axe glinted in the light.

I could see a writhing mass in the center of the enormous crater left by the explosion: the enemy. Red points of light sprang to life on my radar screen, so many that every point was touching another.

I thought I saw Rita nod. She sprang forward, flitting across the battlefield. Her axe rose and fell. Each time it shone, the husk of a Mimic soared. The sand that poured from their wounds spiraled on the whirlwinds traced by her blade. She cut them down with the ease of a laser cutting butter. Her movements took her in a circle around me, protecting me. Rita and I had undergone the same training, but she was like a juggernaut while I lay on the ground, a stupid toy that had run down its batteries. No one had forced me to be here. I had dragged myself to this wasteland of a battlefield, and I wasn't doing a damn bit of good for anyone. Better I'd gotten plugged alongside Yonabaru. At least then I wouldn't have put another soldier in harm's way trying to protect me.

I decided not to die with three rounds left in my pile driver.

I lifted a leg. I put a hand on one knee.

I screamed. I forced myself to keep going.

The red Jacket turned to me.

I heard some noise over my headphones, but I couldn't tell what she was trying to say.

One of the Mimics in the pack stood out from the rest. It wasn't that it looked different from the others. Just another drowned, bloated frog. But there was something about it that set it apart. Maybe proximity to death had sharpened my senses, but somehow I knew that was the one I was meant to fight.

So that's what I did. I leapt at the Mimic and it lashed out at me with its tail. I felt my body lighten. One of my arms had been cut off. The right arm—leaving the pile driver on the left intact. Lucky me. I pulled the trigger.

One more shot. A hole opened in the thing's carapace.

One more shot. I blacked out.

All You Need Is Kill © 2004 by Hiroshi Sakurazaka/SHUEISHA Inc.