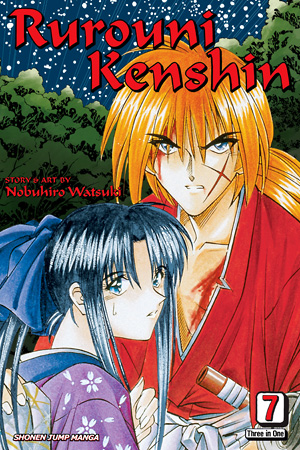 In the new Meiji Era, Himura Kenshin uses his reversed-edge sword to protect the lives of those within his reach, but during the chaos and bloodshed of the Bakumatsu, he was a very different man. What is the true story behind the cross-shaped scar Kenshin bears on his face? It is the tale of Himura Tomoe, Kenshin's wife who died at his very hands, and of her brother Enishi, who has devoted his entire existence to the goal of watching Kenshin suffer.

As one of the deadliest hitokiri in Kyoto several years ago, Kenshin served at the pleasure of Katsura Kogorō of Chōshū. One night, Kenshin found himself doing battle with agents of the shōgunate, and a lone woman from a nearby pub witnessed the scene--but she may not have been there entirely by accident. Betrayal, lost love, revenge: such is the nature of Kenshin's past life. Can he reconcile these old memories in time to prevent the carnage that Enishi is about to visit upon the Kamiya Dojo and those dearest to him?