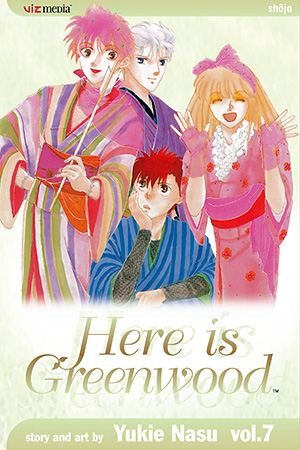 When Kazuya Hasukawa's brother married the girl Kazuya loves, he fled to Ryokuto Academy, where he thought life would be simpler. Was he ever wrong! Assigned to Greenwood Dormitory, Kazuya has become the plaything of golden boys Shinobu Tezuka and Mitsuru Ikeda, who ensure that his stay is anything but relaxing!

Not that Mitsuru and Shinobu don't have their own problems. They can't even make a simple trip to the ice rink without getting into a rivalry with female twin ice-skating champions. And when a girl from Mitsuru's old school shows up at Greenwood, Mitsuru has to face his checkered past as a teenage gang member.

Meanwhile, the home Kazuya left behind has a brand-new resident. It was hard enough for Kazuya to see his brother married to the woman he loves. How will he survive now that the happy couple has a baby?

Flower in a Storm

A Devil and Her Love Song