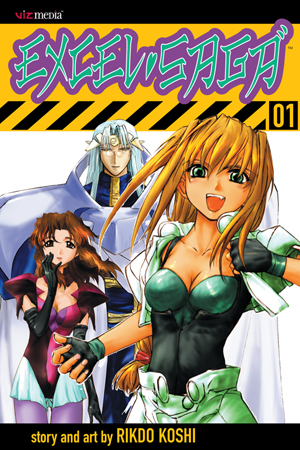 Earnest young girls Excel and Hyatt (both codenames) hold down minimum-wage jobs to support their true avocation: trying to conquer the city of Fukuoka for the secret organization ACROSS and its dreamy dictator, Il Palazzo--a man whose dignity is such that he could never acknowledge that ACROSS consists of himself, a leaky basement, two unpaid teenage interns, and a stray dog. But society is all to blame, as creator Rikdo Koshi takes aim at everything from organized religion to public television, in a manga that makes reindeer spit blood and puts puppies on the dinner menu. Find out why translator Dan Kanemitsu compares Excel Saga to "Michael Moore (Bowling for Columbine) directing Power Rangers"!