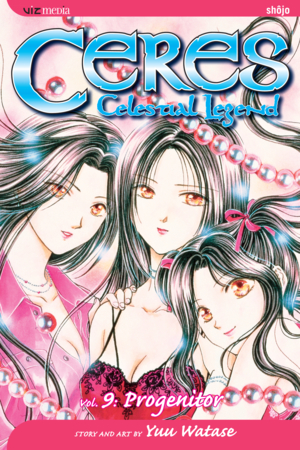 "Naughty Girls Who Hit Their Husbands Must Be Punished..."

Shocked to learn (from Aki, of all people!) that the entire "Tôya Mizuki" personality is false--a fiction, a cipher without a past of any kind--Tôya struggles to find his own identity. If he doesn't know who he is, how can he help Aya? Elsewhere, while Aya recedes into herself, heartbroken and distraught over her separation with Tôya, Ceres must deal with a bitter and increasingly mad Miori, who blames Aya for everything. Will Aya emerge and face Miori's accusations...or leave her to Ceres? Later, Aki--still fully possessed by the "progenitor," the forefather of all the Mikage--launches a new scheme to claim Aya...his woman.

If you like Ceres: Celestial Legend, VIZ Editors recommend: