Created by Ryosuke Takeuchi and Hikaru Miyoshi, Based on the Works of Sir Arthur Conan Doyle | MoreLess about Moriarty the Patriot

Ryosuke Takeuchi was born November 20, 1980, in Hyogo, Japan, and is a manga artist and writer. He got his big break in 2011 with ST&RS, his first serialized Weekly Shonen Jump series. He later did the storyboards for All You Need Is Kill.

Hikaru Miyoshi is a manga artist whose previous work includes Inspector Akane Tsunemori, which was based on the popular anime Psycho-Pass.

Adam Whiteley, member of the House of Commons, is willing to put his life on the line to fight for equality for the common people of Great Britain. William Moriarty pegs him as a potential ally and gives Whiteley a powerful bargaining chip he can use against the House of Lords—evidence of their wrongdoings. Faced with threats on his life, Whiteley must decide how to use this information. Will his ideals lead him down the path of an angel…or a devil?!

Other Moriarty the Patriot volumes

If you like Moriarty the Patriot, VIZ Editors recommend: 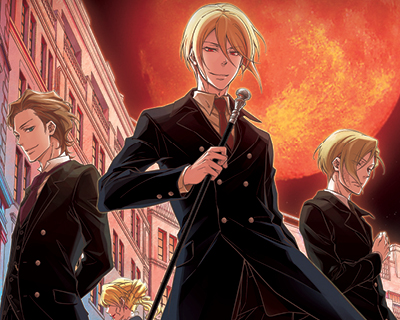 Never miss a new release. Add Moriarty the Patriot to your favorites, and start following it today!