I love One Piece. I’ve read it ever since I’ve read the first chapter in the very first issue of Shonen Jump over a decade ago and I’ve gotten hooked since. What started as a story about a kid with a straw hat and big dreams setting sail towards his goal in the age of piracy, it has evolved into a global phenomenon. Like other popular Jump manga, One Piece spawned an anime, numerous films and a lot of video games, with Romance Dawn being the first pure RPG of the series. When I’ve learned that a One Piece RPG was being produced, I remember wishing that it came out to North America and eventually it did. 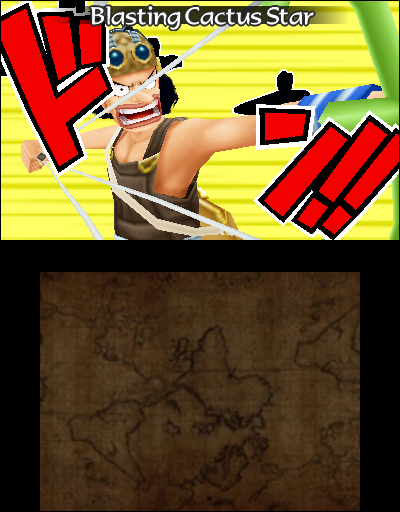 Romance Dawn retells the first half of the One Piece story, from the start of Monkey D. Luffy’s adventure to the end of the war at Marineford. Named after the first chapter of the series, Romance Dawn starts off with Luffy trying to impress the pirate Shanks, who has taken asylum in Luffy’s port village. Shanks’ presence influences Luffy to become a pirate himself, despite not being able to swim. After eating the cursed Gum-Gum fruit by mistake, Luffy gains the power to stretch his body like rubber at the cost of never being able to swim again. After an altercation with mountain bandits and a sea monster, Luffy promises Shanks that he’ll wait until he is older before setting sail to become the Pirate King. Impressed with Luffy’s determination, Shanks gives Luffy his straw hat, a personal treasure of his, as a symbol of that promise. Ten years later, Luffy, now a young man, sets sail to find the One Piece, a legendary treasure left behind by Gold Roger, the infamous Pirate King of legend. 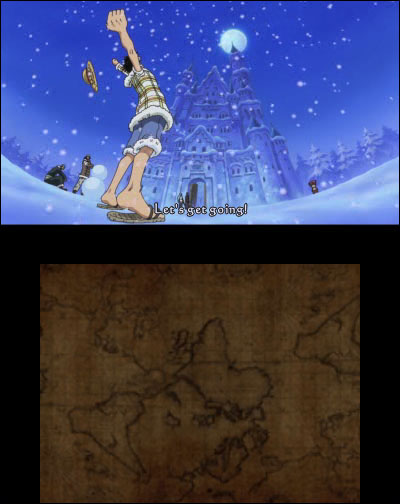 Throughout Romance Dawn, Luffy’s voyage leads him to discover new lands and meet new people that either help or hinder him. As his crew grows in size, he eventually procures a proper vessel and the crew embarks on adventures ranging from saving villages to combating clandestine government agencies. In the game, most of the locales are basically mazes peppered with enemy encounters and random treasures. The story progression is fairly simple, with the plot being advanced by taking character portraits and the occasional FMV clip or anime still. And with 30+ volumes of story to play through, it’ll keep you busy for a while. 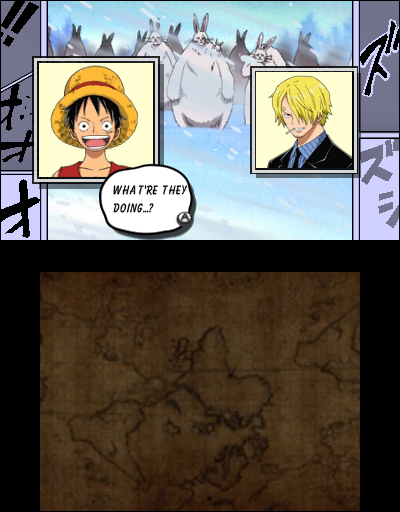 The battles in Romance Dawn are the best part of the game. Battles are turn-based, but there’s a level of interactivity to them, like character positioning and combos. Since all of the Straw Hat pirates are playable, there are a lot of neat moves that can be learned as they level up. The key battles are against series villains such as Arlong, Sir Crocodile and Rob Lucci, although most of the time you’ll battle against generic mobs in the maps to level up. There are also quick time events in some of the maps, so think fast and press the right button during these events or else you’ll falter. 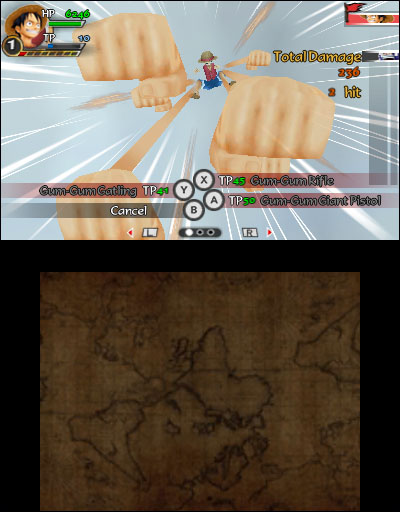 But beware, Romance Dawn is not for landlubbers! This is definitely for the hardcore OP fan. And if you want it, you better move fast, because the boxed editions have been shipped in limited quantities and are sold exclusively at GameStop. It’s also on eShop if you’re okay with the digital copy.

Hint: Be sure to hit up optional areas to level up your crew in case you’re too weak to take on a boss. In addition to gaining experience, you can also score treasure!