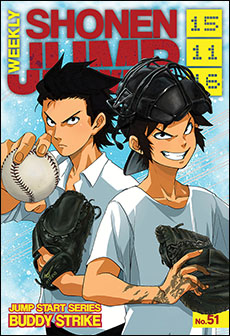 Recognize that art? You should, it's from KAITO Sensei, the mangaka that brought us Cross Manage! At first, a manga about a girls' lacrosse team seemed a little odd to me, but KAITO Sensei's great art, sympathetic characters and dramatic storytelling won me over pretty fast. And not just me, Cross Manage was a hit with the fans as well. Now it looks like Buddy Strike is poised to leave another mark in the world of sports manga!

One thing I love about sports manga is learning new things about sports. Even sports I already know about, like baseball. I had no idea a pitcher and a catcher is called a "battery." So even the first chapter of this JUMP START has made me more knowledgable about America's favorite pastime. Can't wait to go into bars when a game is on and talk about batteries! Haha, in all seriousness this manga looks like it will focus on that special relationships pitchers and catcher have. And with KAITO Sensei's excellent pedigree, you can bet it will be a most interesting tale! 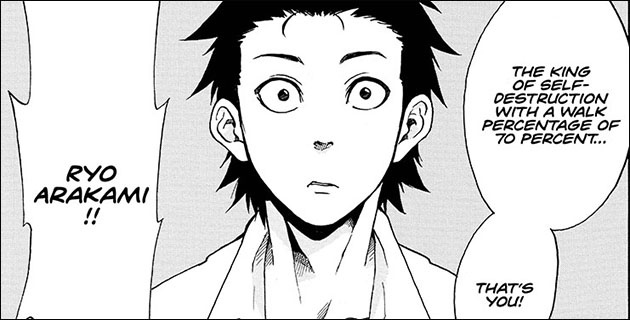 Osamu's group is still struggling to become strong enough to be considered for high-profile missions. But one of the weaknesses in the group is him! Although he's smart, determined and has seen a few battles already, he's just not "special" like Yuma or Chika. But he's not giving up! This is a Shonen Jump manga! Of course he's not giving up! But what can he do to make himself more of an asset to the team?

The Shokugeki is on! Even though the judges have been paid off, Soma's not letting that slow him down one bit! And judging by the announcement of his unique dish, he may be able to pull this off after all! Meanwhile, things at the dorm aren't looking good. They've got invaders at the gate and must defend their castle (or dorm) with all they've got! It's war! A food-related war!

Turns out cooking "God" is harder than anyone thought. And they thought it was going to be pretty hard! How exactly do you cook "God"? Well, I can tell you one thing, you don't microwave it! The next step in the arduous process is to get the golden cookware, but even that's a herculean task! Looks like it's time for some questing!

The fight against the strange bird-thing-quincy is not going well! Captain General Shunsui's been severely injured and now his adjutant has jumped into the fray! Will she be able to finish what he started? Or are they both outgunned?

I sort of thought the last chapter set up for a mixer was some kind of joke, but it's not. This entire chapter is dedicated to a mixer! And a super funny one at that! While Asta and his new friends may excel at magic (or anti-magic in Asta's case), they do not excel in talking to girls. Find out how they fare when they face their most difficult enemy yet—awkward conversation!

Get ready for a heartfelt chapter of Nisekoi! Looks like the attempt to rescue Marika from a forced marriage has come to its end. Do they save her? Does the mean mom get her way? Does Raku fall off the ladder hanging from the helicopter? You'll have to read the chapter to find out! But keep your tissues handy, you'll need 'em!

The big UA test continues! Deku's made it through, but many of his classmates are still struggling. Some will pass, some will fail! Find out who makes the grade!

The Joestar line is known for many things: bravery, determination, musclebound men who strike unusual poses, just to name a few. But one thing they are definitely known for is stubbornness—and Jotaro is not budging from his jail cell. Luckily, grandpa Joestar has brought along reinforcements. Enter the mysterious Avdol! 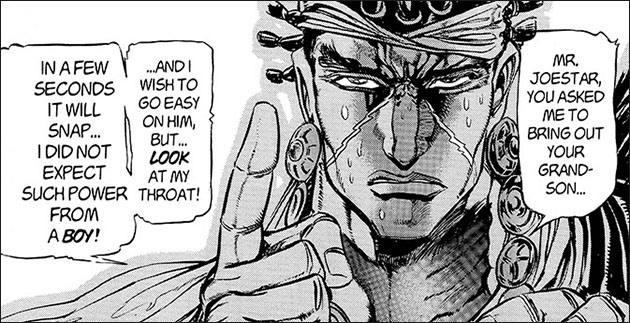