With its many shocking twists and turns, wonderfully developed characters, unique and believable world, and strong uncompromising female lead, The Promised Neverland was a hit from the first chapter. Now that the series is wrapped up and the final manga volume about to hit stores, we got a chance to ask Shirai Sensei some questions about the manga. 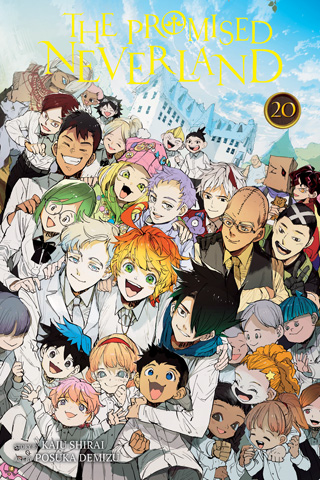 Shonen Jump: Please tell us how you and Demizu Sensei met.

Shirai Sensei: I found out about Demizu Sensei through Twitter and got in contact through my editor, Sugita-san. We were having trouble finding an artist for The Promised Neverland manga series so, at one point, I was looking at the Twitter accounts of good artists. Plus, good artists know other good artists. As a result of that, I was able to meet Demizu Sensei and I’m so glad we’re working together.

SJ: How do you two work together on a single story? Please tell us what each of your roles are.

SJ: How detailed do you get with your human or demon character descriptions?

Shirai Sensei: Hardly at all. With the humans, even at the rough sketch stage I have a design, but I ask that be ignored. As far as the demons, I wouldn’t even create a rough sketch of them and just put the ball in Demizu Sensei’s court. I simply write up a description of what the character is like and send it. 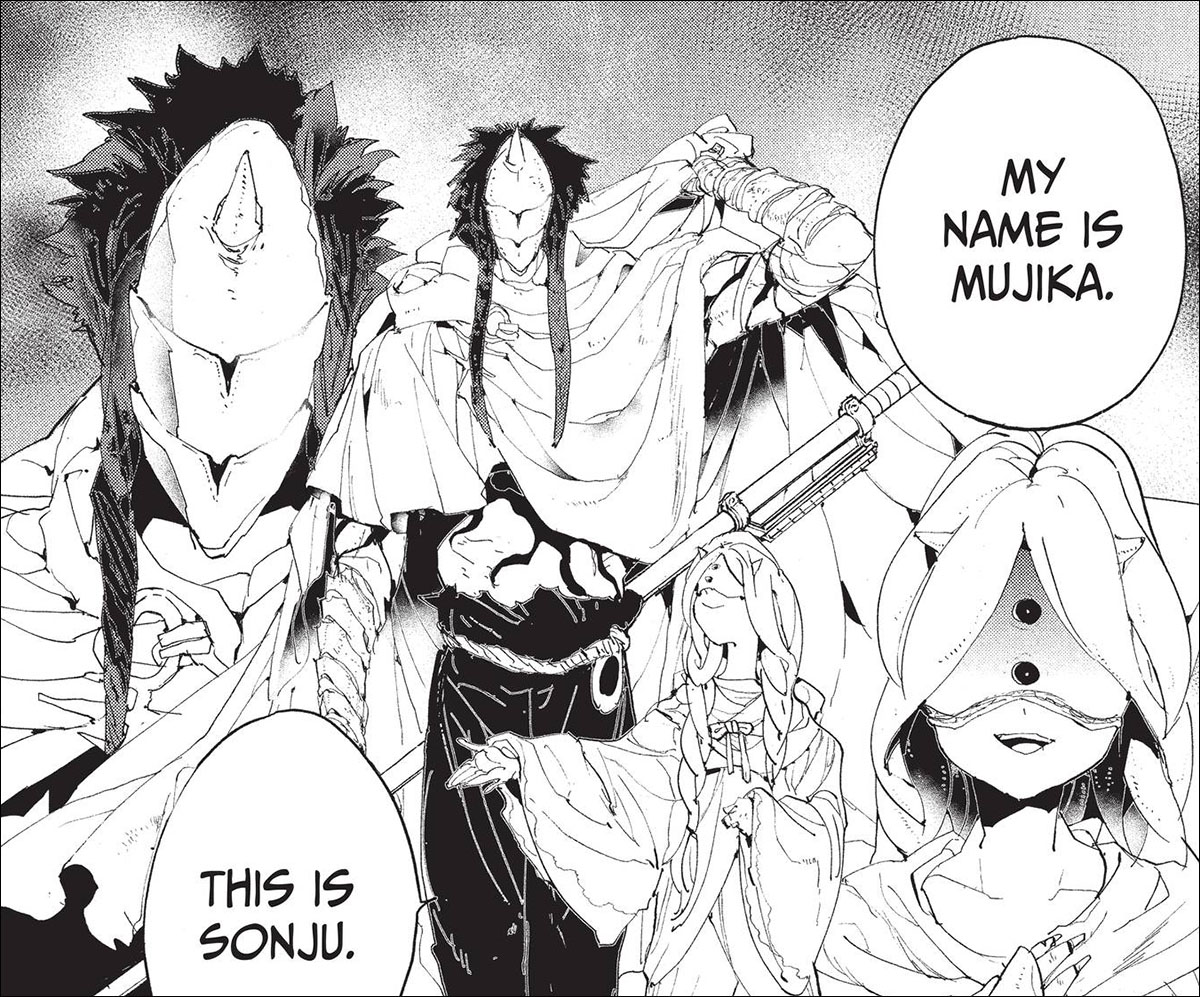 SJ: Can you tell us how you became a mangaka?

Shirai Sensei: I brought the 300-page draft of The Promised Neverland to the publisher and Sugita-san took me on.

SJ: There are many extravagant color illustrations with easter eggs in them. Do you discuss where to hide the easter eggs? Can you give us an example of this process with one of your past illustrations?

Shirai Sensei: Basically, any easter eggs in the art were improvised by Demizu Sensei. In the beginning, I think there were some rare cases that we came up with the idea together, though. For example, when it came time to decide what would be under the dust jacket of volume 2 (in the Japanese edition), Demizu Sensei said, “I’ve been thinking of an image of Minerva, who is someone from the outside world, standing outside of the frame and looking in, but I don’t think that would make much of an impact, so I’m not sure.” So that idea was put on hold. I really thought the idea of “Minerva outside of the frame” was great, so I said “Then, maybe Minerva, who is left-handed, can be outside of the frame and be writing a few interesting words.” Also, I said, “If we don’t put Minerva in this, Phil might be interesting.” Next thing I know, Demizu Sensei had added both Minerva writing something and Phil! It was a really mysterious and exciting illustration. Demizu Sensei is really amazing!

SJ: The title “The Promised Neverland” makes one think of the phrase the “Promised Land” or Peter Pan’s “Neverland.” What did you want to express through the title?

Shirai Sensei: We wanted a create a big difference between the “gentleness” that the title may imply and the actual hell that happens in the story. The word “promise” is from Sir James Matthew Barrie's  Peter Pan, who makes a “promise” with Wendy, and I already knew that our story would eventually involve a “promise” between humans and demons.  This resulted in the English title having a connection to the phrase “promised land,” so it was good to have “promise” in the title.

SJ: In The Promised Neverland, there are many horror elements in the action-adventure story. Are you a horror fan? If so, what horror movie and manga do you like?

Shirai Sensei: I like suspense-thrillers more than horror movies. I’m not sure if this counts as horror (maybe it’s more of a thriller than a horror), but off the top of my head I like, The Others (with Nicole Kidman) and Identity (with John Cusack).

SJ: This manga has scared a lot of children (and sometimes adults too). What are your thoughts on this?

SJ: Emma is a main character that breaks the Shonen Jump mold. She’s not a boy and doesn’t have extraordinary physical abilities nor special powers. When she attacks, she isn’t shouting her attack moves. How did you approach creating such a unique character?

Shirai Sensei: We avoided making her too plain. Whether it’s a character’s thoughts and hopes, the thrill of the story or solving the mystery, we always aim to create entertainment that moves the hearts of our readers. 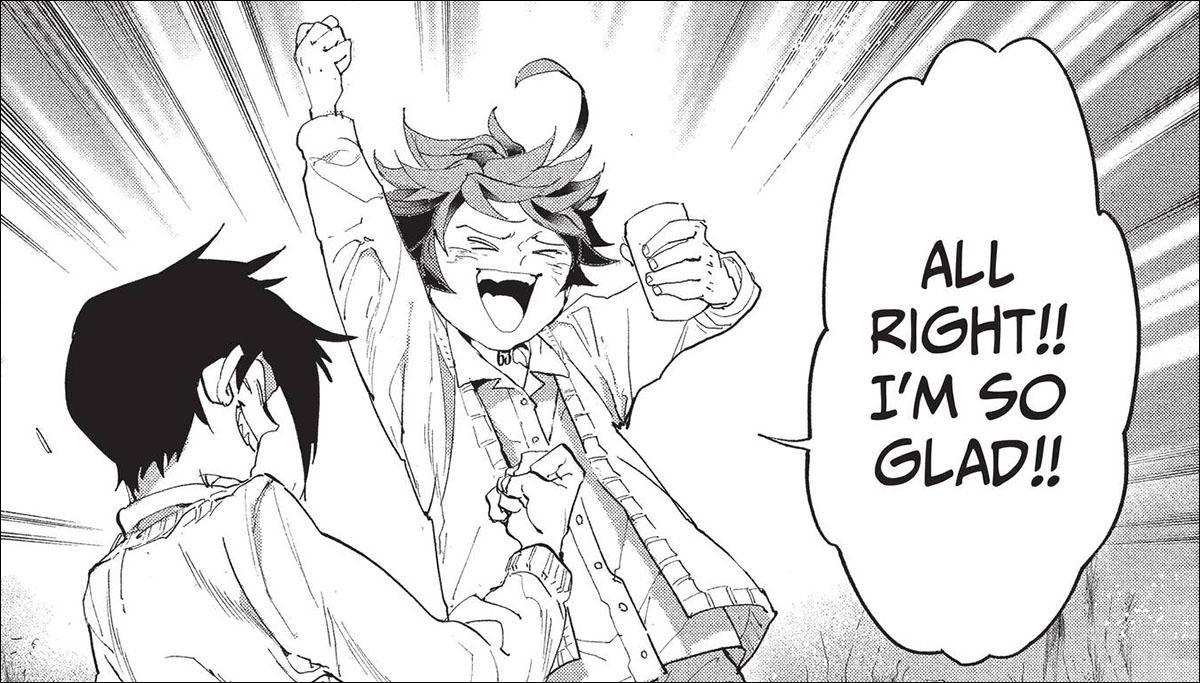 SJ: Each chapter left us on the edge of our seats every week. I couldn’t wait for the next chapter. Who were your influences, Shirai Sensei?

SJ: If Emma, Ray and Norman had grown up in the human world, what jobs would they have?

Shirai Sensei: It’d be fun for the readers to think about that.

SJ: What did you want to communicate through this story?

Shirai Sensei: I don’t have a specific message I want to tell people. There’s a lot of thought that goes into many areas of the story. I didn’t want to push my ideas onto the reader either. How something is perceived isn’t up to the author. I hope that each reader feels something from my work.

SJ: The children in the story must make difficult decisions, but still have hope. Did you work on this with the intent to show younger readers how they can stay positive in life?

Shirai Sensei: We’ve never told our story with that kind of intention. However, Weekly Shonen Jump is published on Mondays in Japan and since it comes out at the beginning of the week, we try to make it positive, so that our readers can start out their week feeling good. So, we do think about the balance between hope and despair in the story. 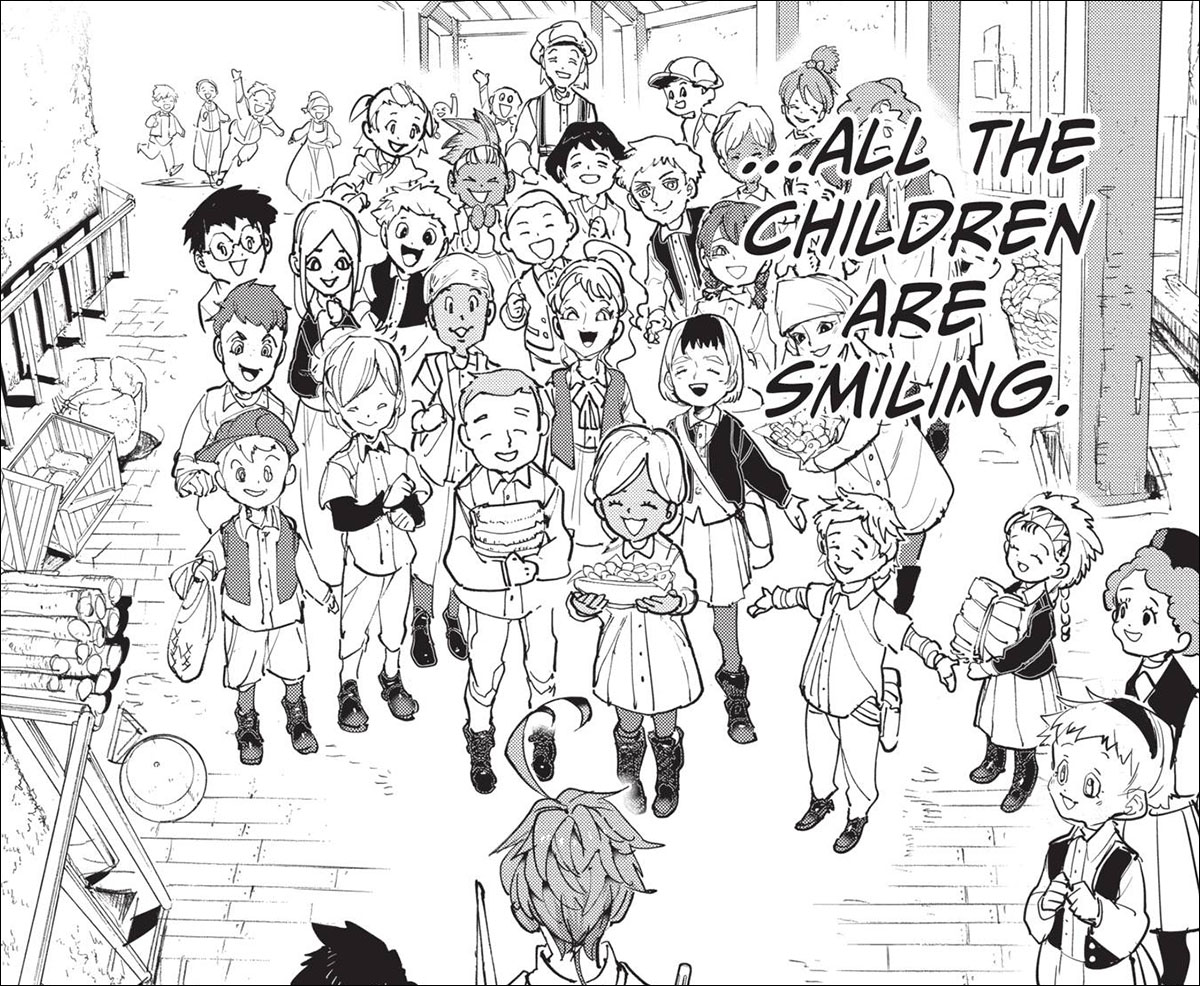 SJ: Out of all the characters, who do you empathize with (or see yourself in them) the most?

Shirai Sensei: I feel that I empathize a little bit with every character. I don’t think there’s a particular character I see myself in. However, the easiest character to write (in terms of understanding who they were) was Ray.

SJ: If you were to play an escape room, which character would you want on your team?

Shirai Sensei: Emma. I think her ideas would be great.

SJ: The demon world that was created is very detailed. It was just as interesting as the human world. How did you come up with ideas for demon society or the beautiful exteriors?

Shirai Sensei: I came up with my ideas from Demizu Sensei’s illustrations. Also, “demons” are perceived as creatures in different ways, such as “god,” “devil,” “monster,” etc., so I thought it would be good to have godliness, fear, eeriness (things that most present-day people would deem hideous), and the fairy tale world all mixed together. 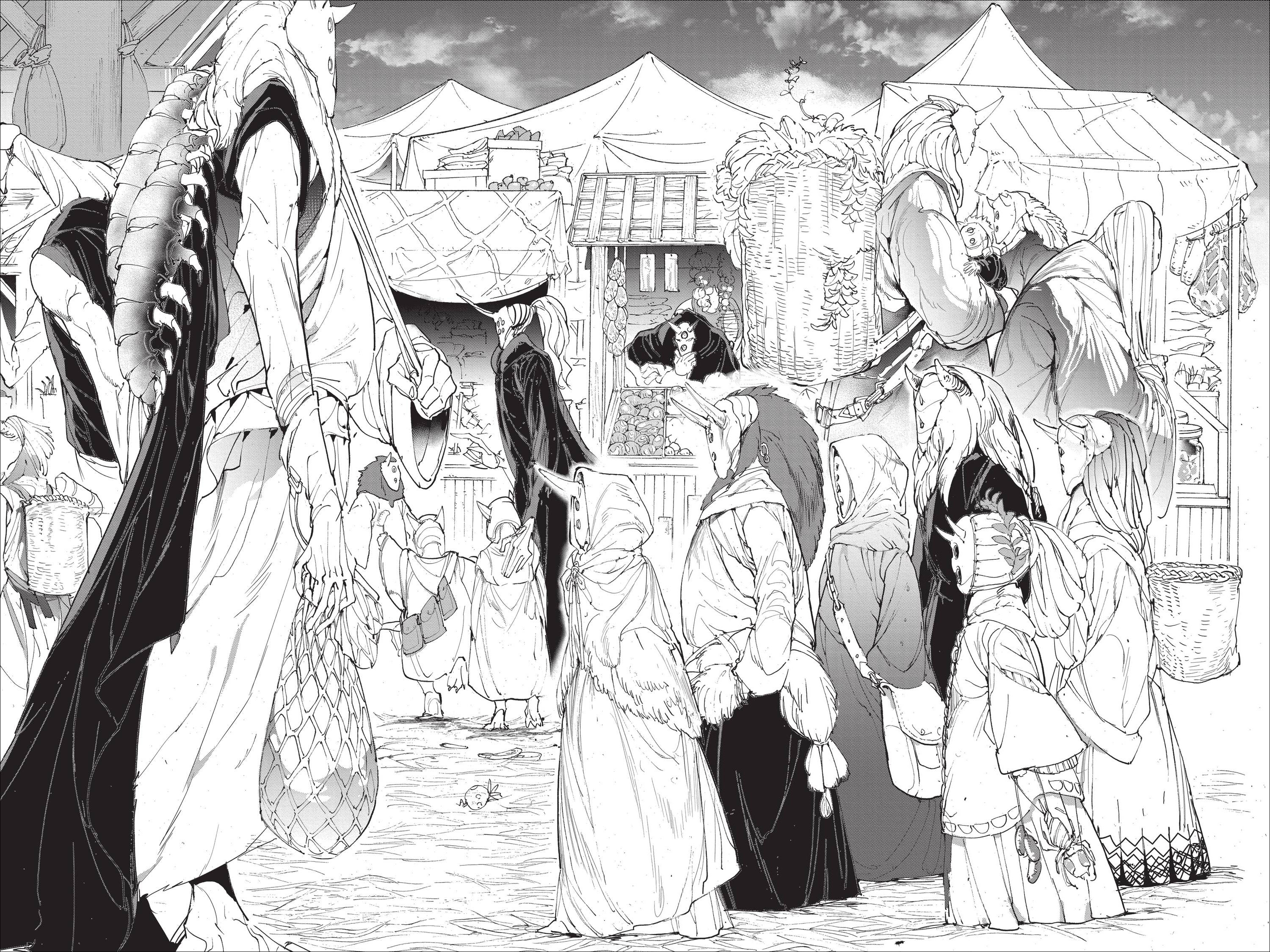 There’s a museum I love in Japan, an outdoor museum in Inuyama City, Aichi prefecture called “The Little World Museum of Man.” And one of their exhibits is called “Spiritual World-Values.” This exhibit made me think what humans have feared and worshiped throughout history. By reflecting on different eras, different indigenous peoples and human values, I imagined and expanded on what demon and demon culture would be like.

SJ: When you were creating The Promised Neverland were there any historical or political events that were an influence?

Shirai Sensei: None in particular.

SJ: The manga is complete, so what are your future plans? Will you two be working on another manga? (Please!!!)

Shirai Sensei: We’re working on something now. Please look forward to it!*
*This interview was conducted in December 2020.

SJ: If The Promised Neverland were to become a video game, what kind of game do you think it would be?

Shirai Sensei: An RPG where you have to clear missions? I am not familiar with video games, so I’m sorry I’m not able to give a snappy answer.

SJ: Do you have a message for your fans in the U.S. and abroad!

“You’re not alone” “Humans are strong” “Let’s live together”

Wishing happiness to everyone.

SJ: Thank you so much for your time and wonderful words of encouragement!

For more about The Promised Neverland from illustrator Posuka Demizu click here.

Order your copy of The Promised Neverland, Vol. 20 written by Kaiu Shirai and illustrated by Posuka Demizu, here!