What would it take to make you happy? Fame? Fortune? Power? For three volumes, the protagonist of the series Mirai has been struggling to find his very own answer. He's embroiled in an insane battle with several other humans for the right to become the next god. To help these chosen few, Angels are assigned to each them. Angels that give them incredible powers. Some humans are good, some are evil, but all are forced to fight for their lives.

After a narrow escape from an exploding tower, Mirai faces off against the evil Metropoliman in what is easily the most angelically frenetic and emotional volume of Platinum End so far. Armed to the teeth with special angelic arrows and three sets of wings, Metropoliman forces Mirai and Mukaido to make an impossible decision: be killed and lose their god candidacy or fly away and abandon hundreds of innocent lives. Never before has the spectacle of our would-be gods been so divinely savage as arrows pierce hearts and minds. But it’s the aftermath of this battle that anoints this volume as the pivotal turning point in the series. 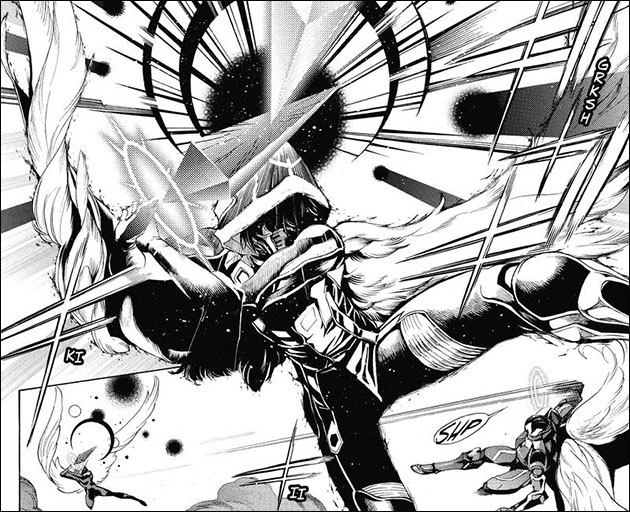 Let’s face it. Mirai’s had a pretty rough life. Losing his parents at an early age to a horrible accident is bad enough, but being adopted into the home of his aunt and uncle who caused it, now that’s anything but heavenly. The past three volumes haven’t been kind either, what with witnessing the public execution of three other God candidates, hunting down a scantily clad serial killer and now confronting Metropoliman for the first time. It’s not until now, however, that Platinum End has fully introduced real emotional stakes into the story.

More than any other, volume four makes clear what distinguishes Mirai from Tsugumi Ohba and Takeshi Obata’s characters in Death Note: doubt. Despite what side they are on, most characters in Death Note have a clear goal and rock-solid conviction in their beliefs. Mirai lacks any clarity or conviction. Mirai flies forward without goals, without direction against Metropoliman, and his actions have real consequences in this volume. Beyond the ambiguous goal of being “happy,” here Mirai questions why he fights, wrestling with what happiness means to him and if that's really what he wants at all. 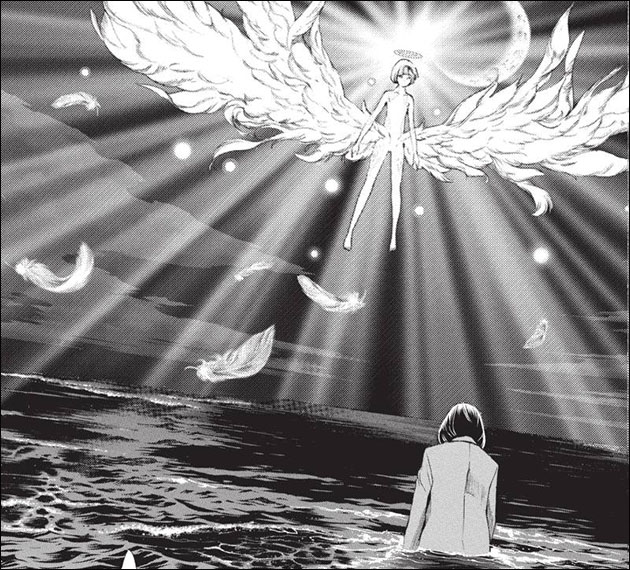 If there were any doubts about Mirai’s motivations in this volume, his friend and former crush Saki embarks on her own journey of character development as well. While Mirai and Metropoliman face off in a battle above, Saki’s battle is waged entirely within as she struggles to find her place in it all. Like Mirai, Saki’s doubts are deeply personal and, as her quiet facade falters her startling past with Mirai is laid bare. In every chapter until now, Saki was a weight upon Mirai. Like one of those shoulder perching angels who whisper good advice or, in Saki’s case, relying on Mirai to fly or even die for her if need be. This volume, however, is Saki’s platinum moment more than any other candidate, her book of revelations that changes not only her character but hopefully the course of the series going forward. 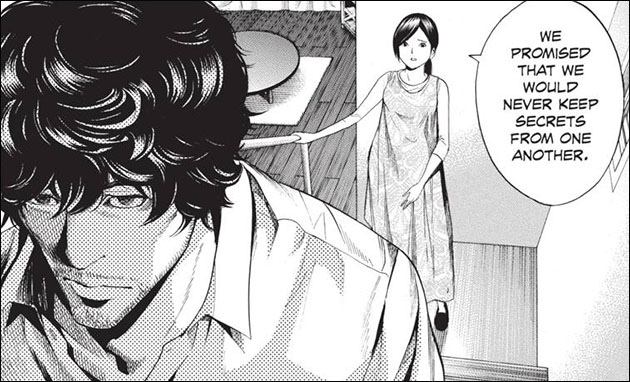 On the other end of the angelic feather, the older member of the group, Mr. Mukaido’s motivation to protect his family has never been clearer: stop Metropoliman at all costs. The means by which he is willing to stop Metropoliman, however, is more morally grey than ever. The best moments of Platinum End are when the ideologies of its characters clash and when Mukaido confronts Mirai’s vow not to kill, even in the face of Metropoliman, the clash complicates their relationship.

What blesses the series with its own halo isn’t just its brooding art and emotionally damaged characters, what defines Platinum End is its lack of distinct moral lines. Angels are not necessarily good and even bad guys are not all bad. Another great strength of this manga is the intricacy of its world-building and the process of becoming God. The game's weaponry and rules are meticulously defined. Especially all the weaponry. For instance, the red arrows that cause love and turn people into slaves only last for 33 days. Then there are white arrows that instantly kill anyone who is pierced. They're faster than any earthly projectile, but if you have angel wings, you can dodge them. There's also a strict hierarchy of angelic ranks each with their own varied arrow types and wings. The series establishes the rules of its angelic universe in such detail half the fun is seeing the characters figure out how to win given the limitations or advantages of what they have. 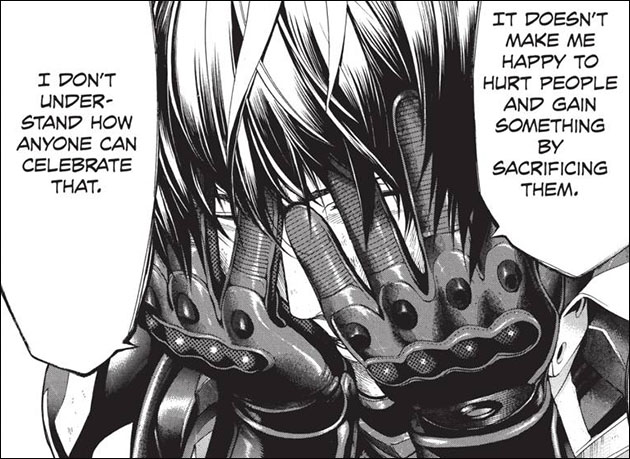 Ultimately, Platinum End still has the cerebral, puzzle-like, qualities that made Death Note so compelling even if it sometimes overwhelms with the number of rules and systems in place. And admittedly, it's hard not to compare the two. But by volume four, the series is really coming into its own and the intimate character growth proves it has its own wings to fly by. And to that, I say, Godspeed.