While giant monsters wreak havoc, one brave rooster must stand his ground!

In a world where terrifying monsters walk the earth, one heroic rooster is destined for greatness. When giant demons threaten the innocent, he’s going to show them who’s boss!

Born on December 7 in Ibaraki prefecture, Japan. Although he has a long career in the manga industry, he has been active as Shu Sakuratani for the past seven years. When he was a child he had a chicken which he loved and cared for. Then one day his grandmother turned it into delicious fried chicken. Later he was told about this and has regretted eating it ever since. Perhaps the creation of Rooster Fighter is related to this painful memory. Maybe.
Add favorite  Favorited Manga trailer

The neighborhood cock of the walk is more than just an ordinary rooster—he’s humanity’s greatest defender! His opponents may be ten stories tall, but nothing is bigger than his stout heart and his fearsome battle cry—cock-a-doodle-doo! 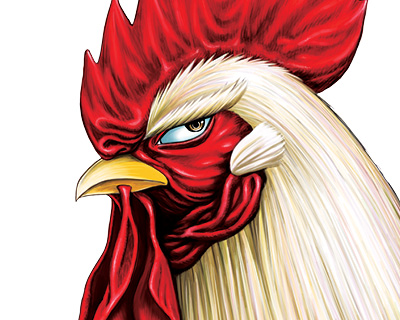 Never miss a new release. Add Rooster Fighter to your favorites, and start following it today!