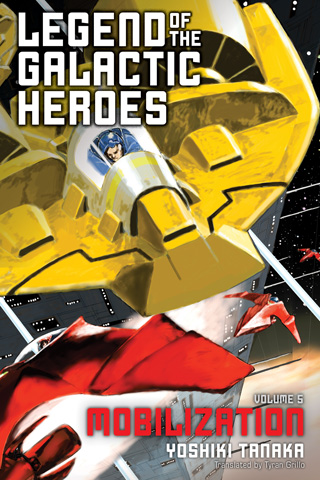 Imperial forces have captured the Phezzan Dominion and draw ever closer to the Free Planets Alliance capital of Heinessen. Yang hurriedly abandons Iserlohn Fortress and heads for the capital to protect countless civilians. Taking out Reinhard is the alliance’s only path to victory. Despite the empire’s superior numbers, Yang continues to outwit its most resourceful generals via tactical wizardry. Reinhard, on the other hand, seeing through Yang’s devices, opts for all-out war. And so, the “invincible” and “undefeated” once again clash swords. Who will emerge victorious?

On March 1, Steinmetz discovered the Yang fleet much sooner than he’d expected. This was, unbeknownst to Steinmetz, because Yang had wanted to be noticed. But the location of his discovery was problematic. Midway between the Raighar and Tripura star systems, it was far removed from any known shipping routes. The reason for this was obvious from the data captured on Phezzan.

“We’ve confirmed the existence of a black hole. Its Schwarzschild radius is about nine kilometers, but its mass is sixty quadrillion tons to the ten billionth power, and the danger-zone radius is estimated to be, at most, 3,200 light-seconds, or 960,000,000 kilometers.”

“Then I’m assuming we shouldn’t get any closer than one billion kilometers?”

According to the operator, Yang’s fleet was precisely toeing that one billion–kilometer line. Moreover, it had assumed a convex formation with the black hole at its rear.

“What could they be planning?”

As Steinmetz inclined his head slightly to one side, chief of staff Vice Admiral Neisebach dispelled his commander’s doubts.

“Putting the danger zone at their rear limits our trajectories of attack. There’s no way we can go around them. That must be their aim.”

Steinmetz nodded. Neisebach’s opinion was sound in its persuasiveness. Steinmetz ordered a concave formation. Both sides were forced to engage head-on.

At 2100 hours that same day, they were in range. First, Yang’s fleet hurled sheaves of light at the enemy. The imperial forces returned fire, sending forth a dazzling cascade into pitch-black space. Slowly yet surely Steinmetz pressed forward, pushing the alliance into apparent disadvantage. The alliance began to retreat. Steinmetz steadied his racing heart, quietly spreading out both wings of his concave formation into a half encirclement.

A turning point in the battle came when, at 0530 on March 2, the alliance, cornered by the empire’s half-circle formation, suddenly charged with fierce gunfire. Moments later, Yang’s ships had breached the center of the Steinmetz fleet, spreading out on either side behind the enemy and driving them toward the black hole.

It was the perfect execution of a “breach and spread” strategy. Steinmetz’s formation had completely backfired. He’d have done better to hold his advantage and charge the Yang fleet in kind. A more reckless commander would’ve done just that. But Steinmetz was top-notch and so had taken the safer way out, much to his chagrin. He’d been blind to the fact that Yang hadn’t gone on the defensive precisely so that he could carry out this bold attack.

The Yang fleet had surrounded the imperial forces in a semicircle, concentrating consistent fire on a single point, thereby pushing the Steinmetz fleet into the black hole’s gravitational field. The imperial forces surged like a stampede into a deadly event horizon—an abyss with a gravitational field reaching six hundred trillion times normal density. The Yang fleet’s firepower came on strong and severe, and one imperial ship after another exploded into particles of light.

The operators of Yang’s flagship Hyperion cheered with excitement. This only incited their commander’s caution.

“Enemy at the rear! I fear a pincer attack.”

The receiver of this report didn’t show one-tenth of the excitement as the one giving it. Yang took off his black beret, ruffling his unruly black hair.

“When you say at the rear, how far are we talking? Time distance is fine.”

The operator flew to the control panel, crunched some numbers, and estimated three hours, give or take.

Yang nodded once, put the beret back on his head, and crammed his disheveled hair under it.

“Then we defeat the enemy in two hours and use the third to make our getaway. Sound good?”

With a nonchalant tone that one might’ve used to suggest dinner after a movie, Miracle Yang ordered his entire fleet to intensify its fire.

Like a herd of cattle being chased off a cliff, the Steinmetz fleet fell prey to the black hole’s gravitational field, which his ships were powerless to resist.

“Help, we’re being pulled in!”

Such cries congested the Imperial Navy’s communication channels before going silent. As the black hole’s inescapable gravity sucked in the Steinmetz fleet, the central ships were pulled in in a straight line, while the surrounding warships were twisted and ripped apart like paper dolls by a fierce tidal force. Riding giant gravitational waves, they rushed through space against their will. Vanishing into the event horizon, they were nothing more than clumps of metal and nonmetal. Those within the ships who resisted the black hole’s pull with all their might died of ruptured organs and broken bones before turning into balls of flame when the nuclear-power reactors exploded, all the while hurtling through a dark tunnel of extinction. It was a wondrous sight, like watching a group of fireflies dancing in the face of death, their light sucked in like the physical substance that it was. The victors became slaves to a strange feeling of unreality as each ball of fire went out, one by one.

Half of the Steinmetz fleet sank forever beyond the event horizon. Of the remaining half, many ships had been destroyed by gunfire, while those that managed to escape both the gravity well and the alliance attack and return to their comrades constituted no more than 20 percent of the entire fleet. This 20 percent, barraged by Yang’s coordinated attack, barely made it to the Schwarzschild radius line and, riding its hyperbolic orbit, gained enough velocity to get out of range. Although the commanders had succeeded in breaking away, their faces were white, like those of the dead.

Following his successful pincer attack, Yang retracted his previous remarks. He suspended his plans for escape, determined to wage battle against the next wave of the enemy. Not only because there was a high chance of being attacked from the rear, but also because, putting together several pieces of intel, they knew that Admiral Helmut Lennenkamp was spearheading the reinforcement division. Anxious about leaving things to Steinmetz alone, Reinhard had wasted no time in sending backup. Lennenkamp had planned on being there in due time, never imagining that Yang would fell an enemy twice his size in a matter of hours. Lennenkamp would have to be equally swift.

“Mister Lennen, is it?” Yang muttered to himself, abbreviating the surname as he often did for his own convenience.

For a mere few seconds, he put a hand to his chin in deep thought before snapping his fingers—a sound that only he could hear, and even then only faintly. If not for the faith of those working under him, his commands would’ve been difficult to grasp and accept.

“Fire three volleys just before the enemy gets within range. After that, we’ll retreat to the Raighar star system. But we’ll do so slowly and systematically.”

Even within the Yang fleet, no one understood the significance of this order, but no one questioned it either. After cutting through the infinite darkness with three aimless shots, they began their escape as if cornered by the advancing imperial forces. At first, the latter took the bait and upped their speed, but then Commander Lennenkamp suddenly ordered his men to fall back, and this they did begrudgingly.

That’s when Yang, his eyes locked on the screen, ordered a full counterattack.

His timing was exquisite. Lennenkamp’s retreat had given momentum to the enemy’s attack. Flashes of light mowed down both the darkness and the imperial fleet in one go, lighting up screens and retinas alike with their explosions. Seeing the wall of light approaching his flagship, Lennenkamp lost the will to fight and retreated after all. At 1300 hours, after half of its forces had been driven away, the imperial fleet pulled itself back together, at which point Yang made his getaway in earnest.

“I wonder why the enemy retreated midattack. Had they kept going, they probably would’ve won,” said Julian to the dark-haired young marshal on Hyperion’s bridge. Even to Julian, it was a mystery.

Lennenkamp, Yang explained, had been enticed by the Yang fleet in the battle over Iserlohn Fortress and had dealt him a hard blow. If Yang had learned anything from this exchange, it was that Lennenkamp would likely take any opportunity given to him as a trap and take precautions
accordingly. If the alliance’s retreat seemed deliberate, then no doubt Lennenkamp would be wary to give chase. Any simple commander hell- bent on revenge would’ve done the opposite. Yang had made clever use of this psychology.

“Yet again, many tens of thousands of widows and orphans will despise me for what I’ve done today. It’s a little too heavy for me to bear it all. You only have to fall into hell once…”