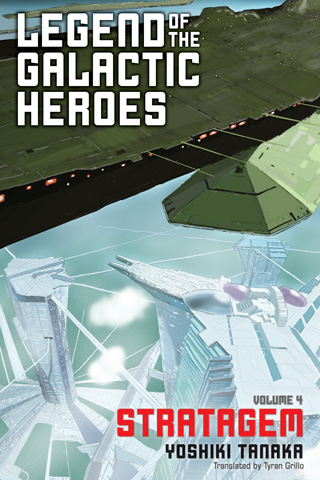 Remnants of the high nobility, manipulated by the “third power” of Phezzan, abduct the seven-year-old emperor and, with the cooperation of the Free Planets Alliance, declare the establishment of a traditional imperial government. Reinhard, however, has turned the tables by making a secret pact with Phezzan’s high officials and plans a grand invasion of the alliance by way of the Phezzan Corridor. So begins an epic battle between Yang—who, despite surmising Reinhard’s true intentions, must defend Iserlohn—and the Imperial Navy’s peerless fighter, von Reuentahl.

Until nearly two years ago, Heidrich Lang had held an important bureaucratic position. As chief of the Bureau for the Maintenance of Public Order, his duties had involved rounding up political offenders and thought criminals, monitoring or suppressing free speech activities, and even dabbling in education and the arts. He was a fulcrum of authoritarianism within the imperial government, and as such exploited the full range of his power and influence. He stood to one day become secretary of the interior.

Lang had not been put to death as a member of the old regime by von Lohengramm’s new order. There were two reasons for this: First, as chief of secret police he’d excelled at intelligence gathering and had amassed much in the way of valuable information on the nobles. Second, as a business specialist he possessed an awareness and loyalty all his own, and had expressed his intention to follow the new ruler after the former high nobles—whom Mittermeier maliciously dubbed the “shepherds”—fell. Lang saw no reason to despair over Reinhard’s abolishment of the bureau, and he believed in himself enough to wait patiently for the day when the sun would again dispel the darkness.

His patience had paid off sooner than he’d expected. The military police, whose self-imposed disgruntlement was an apparent obligation of their work, were ordered by Senior Admiral von Oberstein’s office to release him from house arrest.

Fortunately for Lang, von Oberstein’s thorough investigation turned up no evidence to suggest he’d abused his authority in any way for personal gain. He was, among the higher-ups of the old regime, uniquely flawless in his personal conduct and was treated like a darling of the nobility despite disliking their company. He put all his diligence into his duties and was, not without reason, known as the “Hunting Dog.”

Just looking at him, von Oberstein wanted to laugh—not that he would have said as much to his face. Lang’s outward appearance was incongruous with his talents and achievements. Although he wasn’t yet past forty, 80 percent of his brown hair had vanished. What little was left clung for dear life around his ears. His ashen eyes were big and restless. His lips were thick and red, although his mouth was small. His head was relatively big for someone of his short stature. His entire body was more than plump, and the skin covering it pink and glossy. In short, Heidrich Lang gave the visual impression of a healthy baby full of mother’s milk, and guessing his professional duties by his appearance alone wouldn’t have been easy for anyone with an active imagination. As chief of secret police, he stood out for not having a more coolheaded, grizzled exterior.

But it was his voice that showed just how unique he was. The average person would have thought such a man to have the high-pitched voice of a child. What came out of Lang’s mouth was instead a solemn bass, like that of some ancient religious leader preaching the gospel to his believers. Those who stood ready to stifle their laughter were bowled over. Taking advantage of this contradiction caught his opponents off guard, and his bass had served him well as a weapon of interrogation.

But the man before him now, whose artificial eyes stared at him inorganically by way of a light computer, would decide whether Lang deserved consideration and then report back to the imperial prime minister, Duke von Lohengramm.

“Your Excellency Chief of Staff, you can spin it however you want, but government has only one reality."

Lang spoke emphatically, and von Oberstein had already been evaluating Lang’s speech from word one.

“Control of the many by the few.”

Lang’s voice was so much like that of a solitary man appealing to God that one almost expected a pipe organ to accompany him. Then again, holding full life-or-death authority as he did over Lang, von Oberstein was like God in that no matter how sincerely one spoke to him, it was never enough.

“We insist on democracy being rule of the many by free will, but I’d like to know your thoughts on that point.”

“If the people number one hundred, fifty-one of them can claim majority rule. And when that majority is divided into so many factions, it only takes twenty-six of those to rule over that same hundred. In other words, it’s possible for a mere fourth to rule the many. A conventional and reductionist view, I admit, but one that shows just how useless majority rule is as a democratic principle. I know a man of Your Excellency’s intelligence will understand.”

Von Oberstein ignored the knee-jerk flattery. Like his master, Reinhard, he couldn’t help but notice that those who brownnosed him were always the ones who despised him. Ignoring that he was being ignored, Lang went on.

“Since the reality of government is control of the many by the few, I’m sure you’ll agree that people like me are indispensable for keeping things in line.”

“You mean the secret police?”

“Someone to maintain a system of public order.”

It was a subtle turn of phrase, but von Oberstein again disregarded the man’s modest self-assertion.

“The secret police may be convenient for those in power, but their very existence becomes a target of hatred. Although the Bureau for the Maintenance of Public Order was only recently dismantled, there are many who would punish you for overseeing it. People like that reformist Karl Bracke.”

“Mr. Bracke has his own ideas, but all I’ve ever done is devote myself to the dynasty, never once exercising the limits of my authority for personal gain. Should you take my loyalty as cause for punishment, it won’t turn out well for Duke von Lohengramm.”

From beneath the clothes of this goodly intentioned advice, a holster of threat was beginning to peek out. If he was being accused not only for past misdeeds but also for his tenure at the bureau, then did he have something else in mind?

“It would seem Duke von Lohengramm doesn’t care much for your existence, either.”

“Duke von Lohengramm is first and foremost a soldier. It’s only natural he’d try to subjugate the universe through grand battles. But sometimes the smallest false rumor may outrival a fleet of ten thousand ships, and defense becomes the best form of attack. I would expect nothing less than the utmost discernment and forbearance from both Duke von Lohengramm and Your Excellency.”