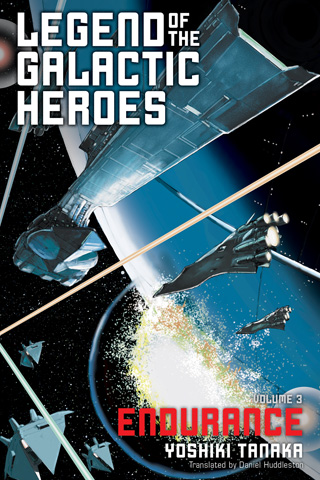 A grand scheme for retaking Iserlohn is delivered to Reinhard, who with renewed determination seeks to become ruler of the galaxy and to fulfill the oath he made with a dear, departed friend. But what are the aims of Phezzan, the third force at work behind the scenes? Meanwhile, no sooner is Yang breathing a sigh of relief when Julian returns from his first combat mission than he is summoned to an inquest and departs for the capital of the alliance. As if waiting for this opportunity to strike, however, the imperial military's secret weapon appears right at the gates of Iserlohn. The battle begins! Who will endure?

“Cruiser Rembach has just been destroyed.”

Operator reports often left Commander Eisendorff feeling unpleasant. Whether the report was delivered with robotic calm or with a hysterical sense of emergency, both styles had a way of scrambling his nerves. So what? he wanted to shout back at them. The solitude of command—that inability to delegate judgments and decisions to anyone else—was making him want to lash out at these people who had no such responsibilities.

“Stop reporting every needless detail!” he said, rewarding the operator with not only a shout, but a blow to the back of the head as well. Perhaps the operator too could now be numbered among Julian’s victims.

Over on the Alliance Armed Forces’ side, however, Rear Admiral Attenborough was feeling a similar sort of irritation. Although possessed of outstanding qualities as a commander, someone else might indeed be better suited to the challenge of leading this “troop of boy scouts” into battle.

For Attenborough, Rear Admiral Eisendorff’s excessively circumspect attitude came as an unexpected salvation, and yet at the same time, it was slowly but surely increasing his fear that their fatal weakness might be discovered at any moment. It was then that Attenborough, who had been shouldering the nigh-unbearable weight of command, saw an allied vessel flit calmly across his main screen as though it hadn’t a care in the world. Doing a double take, he asked his aide, “That was Ulysses just now, wasn’t it?”

At the sound of that name, a smile spread across Attenborough’s youthful features. Even in the midst of fierce battle, it was still possible to tickle humanity’s undying sense of humor. Ulysses was the leading “brawler” of the Iserlohn Patrol Fleet, surpassing almost all the other vessels in terms of both its number of combat flights and its distinguished military successes. Nevertheless, Ulysses was most widely renowned as “the battleship with broken toilets,” which was why its name never failed to draw a grin when spoken or heard. The nickname had no basis in fact, but to most people, a falsehood dressed up to suit their own tastes was far more enjoyable than a prosaic fact, no matter how annoying that falsehood might be to its target…

“I’d like some of that ship’s good luck to rub off on the rest of us,” said Attenborough. “All hands, stay alive, even if you look bad doing it.”

The sound of laughter broke out around the bridge, and if only for a moment, a feeling that things would be all right drifted through the air. Though the crew of Ulysses might prefer otherwise, the ship’s nickname was clearly effective in easing the tension of fleet personnel and revitalizing them in both body and spirit.

Nine hours had already passed since the battle had commenced. During that time, Julian had flown four sorties from his mother ship, Amərətāt. On his third time out, he had destroyed neither fighter nor warship. This had probably been because the spartanian squadrons, having lost fighter after fighter, were becoming easy prey for walküren gunfire, and a gap had appeared between the two sides in terms of numbers of surviving fighter craft. Coming under fire from two walküren at once, Julian had been forced to desperately flee this way and that just trying to stay alive. Julian had soon given up on useless counterattacks and focused only on escaping. The two walküren had competed over their prey, both relying on solo moves rather than cooperating. If not for both of these factors, Julian would have been dead. But instead, the two walküren had interfered with each other. When Julian had shaken them off and just barely managed to flee back to his mother ship’s womb, he had sat in the cockpit for a while afterward with his head down, unable to say so much as a word.

And then there had been his fourth sortie, or more properly, his escape from the mother ship after it had taken a hit. In defiance of its name, the “immortal” Amərətāt had fallen prey to fusion missiles and broken in half across its center. Both pieces had exploded separately. After Julian, nearly engulfed in the huge, expanding fireball, had at last escaped into empty space, a walküre had appeared in front of him. He had been just a fraction of a second faster in pulling the trigger that blew it to pieces. The walküre’s enemy-detection functions had been severely impaired by the ball of fire at Julian’s back. Although he had been victorious, his recharging aboard the mother ship had been incomplete, which meant that his energy reserves were still nearly depleted. With despair clouding his dark-brown eyes, he had turned to look at the monitor, staring at it as he held his breath and gave a nervous laugh. Countless points of light had appeared from the direction of Iserlohn Fortress, forming a rapidly expanding wall of light.

And the effect was spectacular. Cheers rose up, and countless berets flew into the air. To inform allied vessels, and at the same time rub their enemies’ faces in it, EM signals whose interception was fully expected went racing across the comm channels of the FPA forces.

Meanwhile, the imperial forces were in shock. Operators aboard every vessel had gone pale in the face as they stared into their monitors, paralyzing their commanders with reports that bordered on screams.

“Over ten thousand?!” the commanders groaned. “That’s not even a contest!” The word “withdraw” was flashing brightly in their minds. They had not lost the part of their reason that calculated advantage and disadvantage, and they had just enough flexibility to sound a withdrawal when the answer came up “disadvantage.” The imperial fleet’s own reinforcements would not be long in coming, but they lacked the huge force strength of the enemy, and more importantly, it was almost certain that once they themselves had been wiped out, it would be their reinforcements’ turn to be destroyed separately. Eisendorff, setting an example for the others, began the retreat.

“The enemy has lost the will to fight and is taking flight. Shall we pursue?”

On the bridge of the battleship Hyperion, Lieutenant Frederica Greenhill awaited instructions from their dark-haired commander.

If the imperial force retreated and their allies were saved, then the goals of this mobilization had been achieved. It would serve no strategic purpose to surround and annihilate a numerically inferior enemy force that didn’t want to fight, nor would it give him any pleasure as a tactician to do so. The main reason he had brought such a large force out in the first place had been to scare off the enemy without fighting.

“In that case, Excellency, shall we recover those whose ships have been destroyed and head back together as soon as emergency repairs are completed?”

“That’ll be fine. Oh, and to prevent something like this from happening in the future, we should probably deploy a few surveillance and relay satellites in this area as well.”

Merkatz looked on with gentle approval as Frederica briskly executed her commander’s instructions. Even in his long record of service, he couldn’t remember many aides as competent as she.

As Frederica prepared to give a new report, she saw the outline of Yang’s body appear to stiffen just slightly.

“He’s returned safely.” Looking on with warmth as the strength drained out of Yang’s shoulders, Frederica continued. “He destroyed three walküren and one cruiser.”

“He destroyed a cruiser? In his very first battle?” It wasn’t Yang who had spoken; it was the commander of fortress defenses, Walter von Schönkopf, who had come aboard saying he wanted to see the results of the new recruits’ training. He was also Julian’s instructor in marksmanship and hand-to-hand combat. Frederica nodded, and he clapped his hands together, looking pleased.

“That kid is all surprises. He’s a natural at this. Not even I got to show off that much on my first outing. I’m actually kind of worried about just how much he’ll grow in the future…”

“What are you talking about?” said Yang. “All he’s done is blow through a lifetime’s worth of good luck in one go. If he ends up taking a light view of battle now, this won’t have been good for him. The real test starts now.”

Yang had intended to speak with the attitude of a strict instructor, but when he saw Frederica and von Schönkopf’s faces, he knew right away that he could claim no success in that. Their faces seemed to be telling him, You really don’t have to try so hard.

It was in this manner that Julian Mintz concluded his first combat outing.

He had emerged alive.