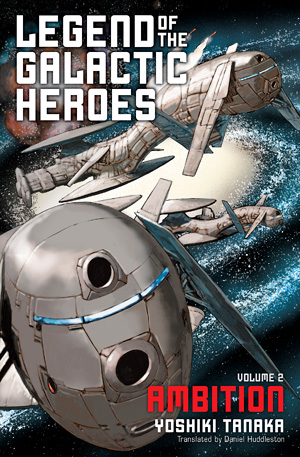 Legend of the Galactic Heroes, Vol. 2

After a coup d'état erupts in the Free Planets Alliance, military strategist Yang Wen-li is ordered to use his tactical wizardry to put down the rebellion, but the ringleader holding the capital is someone he once trusted deeply. Meanwhile, in the Galactic Empire, Reinhard will soon face a new trial, as in the wake of the emperor's death he stands amidst an intensifying power struggle among the aristocracy. The unbeatable magician and the unstoppable genius: the battles these heroes wage will send shock waves across the galaxy!

During the space of eight hours, Reinhard’s armored grenadiers charged nine times into Corridor Six and nine times were beaten back.

Among the high-ranking officers of the imperial military, including both pro- and anti-Reinhard factions, no man had killed as many people with his own hands as Ofresser. Born a low-ranking aristocrat, this man had reached the highest echelons of the imperial military not through political power, and not through tactical wizardry, but simply through the sheer amount of rebel blood he had spilled. This man had flooded Corridor Six with the gaseous explosive known as Seffl particles, denying his opponents, and his allies, the use of even light firearms. Determinedly using only his body and his physical strength, he kept on fighting to send one more, just one more opponent, to death.

His tomahawk, as though making its own the gruesome desires of its owner, smashed the bodies of Reinhard’s men, reducing them to blood-splattered chunks of meat.

Both Mittermeier and von Reuentahl were men far removed from what might be called squeamishness. Even they, however, could not help averting their eyes from the scene as a soldier with one leg chopped off at the knee was trying desperately to drag himself away with both hands, and Ofresser simply walked up to him and smashed in his head with his giant, blood-fouled tomahawk.

In Ofresser’s eyes, just visible through his full-face helmet, there rippled waves of brutal laughter. What held Mittermeier and von Reuentahl back from unequivocal praise of the man was that brutality, which transcended the bounds of bravery, inspiring physiological reactions of disgust.

Regardless of how they felt about him, it was an unassailable fact that the mission had stalled, with Corridor Six still unclaimed because of this lone, bestial man. Their anger toward Ofresser was doubled by that fact.

“We can’t let that monster live,” Mittermeier said in a low voice. Yet in spite of his tone and the intense look in his eyes, his words were somehow lacking in punch. The ability to lead massive fleets of ships through the vastness of space put these two men in the top class of the whole human race, yet with conditions as they were and an environment this limiting, they felt helpless in the face of Ofresser’s primitive fighting spirit and brute strength.

And yet, what was it that was holding Ofresser and his team physically and mentally together in the face of Reinhard’s forces’ repeated waves of attack? They kept on fighting and repelling them, even with no fresh troops to relieve them.

Normally, it would be unthinkable to fight uninterrupted in power armor for as long a period as eight hours.

Power armor was completely insulated, and even the absolute zero cold of outer space would have no effect on the human inside. But by the same token, the heat released by the human body had nowhere to go, so a soldier in the hard-to-endure temperatures of a suit used too long would very quickly lose his physical strength. A temperature-control device small enough to pose no obstacle to combat could just barely lower the temperature to 7 or 8 degrees centigrade lower than that of the human body.

So even driven  mad with hatred and hostility  toward  Reinhard, the high temperature and various other unpleasant elements—sweat, itchiness, excretory troubles, feelings of despair—should have become unbearable after two hours. For them to have held out for eight . . .

There was no other conclusion. It was only by using stimulants to keep themselves excited and awake that they could perform this super­human labor. Just then, there was a transmission from Reinhard asking for a report on the status of the battle, and both of them briefly pulled back from the front line of the fight.

“Ofresser is a hero,” Reinhard opined with a hint of a cold smile after hearing their report. “But he’s a hero of the Stone Age.”

He was not going to dress down his two humiliated admirals, though.

“Leaving him alive serves no purpose, and most importantly, survival is not something that man is wishing for himself. Kill him as spectacu­larly as you are able.”

“Wait just a moment,” a third voice cut in. It was the chief of staff, von Oberstein. “I’d like to take him alive. Allow me to show Your Excellency how he may be of use.”

“You think that a man that obstinate could be of use to me?”

“It’s not a matter of his being willing.”

Reinhard’s brows drew together at those words.

“Brainwash him, you mean?” Reinhard could not muster favorable feelings toward chemical or neuro-electrical brainwashing.

His chief of staff only smiled and for a moment said not a word. “I’ll do nothing so uncouth as that,” von Oberstein said at last. “Please, just leave everything to me. Then you can watch as I sow a seed of mutual distrust among the nobles . . .”

“Very well, then, I leave it in your hands.”

As Reinhard spoke, a report came in from a communications officer.

Ofresser, the officer said, had appeared on the comm screen. At the news that he was triumphantly shouting something, Reinhard had him patch the feed through to his viewscreen.

“Is the golden brat brave enough to look me in the eye—even through a viewscreen?”

Ofresser was still wearing the helmet and took up the whole of the screen with his huge frame. His armor was darkly stained with human blood, and there were even bits of flesh stuck to it here and there. Around Reinhard, there were growls of anger and gasps of fear.

That was how the bestial giant looked as he began hurling insults at Reinhard through his armor’s comm system. After calling him a traitor who had trampled on the favor of the imperial family, a coward, an immoral monster, and an inexperienced whelp who had just gotten lucky, he added, “And you and your sister both used sex to deceive our prior emperor—”

It was in that instant that the cool reason in Reinhard’s graceful features went flying to the wayside, yielding its seat to an explosive anger. Lightning flashed in those ice-blue eyes, and the sound of grinding teeth slipped from between his finely shaped lips.

“Drag that obscene oaf before me. Alive. Even if you have to rip off his arms and his legs, do not kill him. I am going to tear his filthy mouth to shreds with my own two hands!”

The two admirals exchanged a glance. That was going to be a tall order. Too late, they realized for certain that Reinhard was just another creature of emotion.