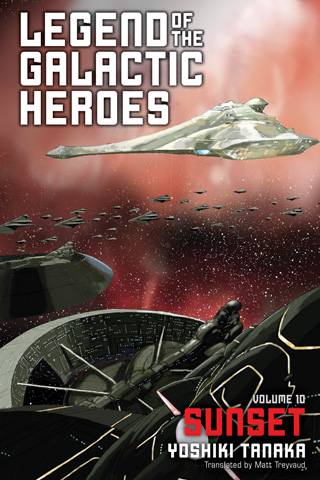 Having taken his devoted confidant Hildegard von Lohengramm as his empress, Kaiser Reinhard awaits the birth of his heir. Much remains to trouble him, from the ongoing campaign of terror by Church of Terra diehards to the machinations of an erstwhile landesherr, and there are ominous signs that his own condition may be graver than anyone suspects. Nevertheless, it seems that peace has finally come to the New Galactic Empire. Meanwhile, in the Iserlohn Republic, Julian Mintz, successor to Yang the Magician, resolves to begin the first and final battle fought on the republic’s terms—the world-shaking conclusion to the Legend of the Galactic Heroes.

Winter starlight
poured down like a sapphire waterfall on the garden at Imperial Headquarters.
When the third year of the New Imperial Calendar was just an hour old, Kaiser
Reinhard von Lohengramm faced a gathering of civilian and military officials in
the courtyard at Imperial Headquarters and announced his intention to marry.
After a moment of stunned silence, the guests raised their voices in
celebration. As Reinhard took the hand of Hildegard “Hilda” von Mariendorf—who,
though a woman, held the vital post of chief advisor to Imperial
Headquarters—someone shouted out an impassioned cry of “Hoch Kaiserin!”

The
cry felt crisp and bracing, and half a moment later it  birthed countless followers.

The
prospect of Reinhard marrying Hildegard was too natural to inspire much surprise.
Rumors had long circulated about their relationship, and not malicious ones.

“A
toast to His Majesty and the bride-to-be!”

Glasses
clinked together. Laughter spread. The festive mood that filled the garden was
further heightened by the revelation that Hilda was expecting a child in early
June. New bottles of champagne were uncorked as new songs filled the night air.

“A
toast to His Imperial Highness the prince!”

“No,
to Her Majesty, our beautiful new empress!”

“In
any event, what a joyous day!

After
the turmoil and trials of the previous year, there was a strong shared desire
for a quieter and better year to come. The engagement of the kaiser seemed to
them the first sign of better fortune, symbolizing a year of peace and
prosperity. What was more, the imperial heir would ensure that the Lohengramm
Dynasty endured beyond its first generation. The child was sure to be beautiful
and wise, no matter which parent it took after. The cheers continued, with no
sign of dying down.

Reinhard’s
health also seemed to have improved. He had always hated doctors, and since
October, the time and expertise of his court physicians had gone greatly
underutilized, finding primary exercise in a hushed debate which had produced a
tentative name for the mysterious condition that intermittently forced the
kaiser to take to his bed with fever: Kaiserich
Krankheit, “the Kaiser’s Malady”—although, like the common cold, what this
actually named was less an illness than a set of symptoms. It was only in
Reinhard’s final days that the formal name, “Variable Fulminant Collagen
Disease,” came into use.

At
the turn of the year, the court physicians were more focused on Hilda and her
unborn child, not least because Reinhard had personally given orders to this
effect. The pregnancy was proceeding without incident, and Hilda was expected
to give birth on June 1—although, the physicians cautioned, a woman’s first
birth is often slightly delayed, so the child might come as late as June 10. In
any case, barring unforeseen complications, the midpoint of the coming year
would be marked by the birthing cry of the most celebrated newborn in the
galaxy—and the one on which weighed the heaviest expectations.

It
is often said that autocratic rulers love as private figures but marry as public
ones. In Reinhard’s case, however, the question of whether his relationship
with Hilda was a romantic one or not was an awkward one, both in his time and
in later generations. What is undeniable is that both Reinhard himself and the
Lohengramm Dynasty needed her.

“Kaiser
Reinhard founded the Lohengramm Dynasty, but it was Kaiserin Hildegard who
raised it”

Among
later historians, a rather base squabble would break out over which of them
first authored this trenchant observation In any case, though, there were no
objections to Reinhard and Hilda’s union among their contemporaries. This was,
no doubt, partly because of Hilda’s father, Count Franz von Mariendorf, whose
warm character had earned him few enemies.