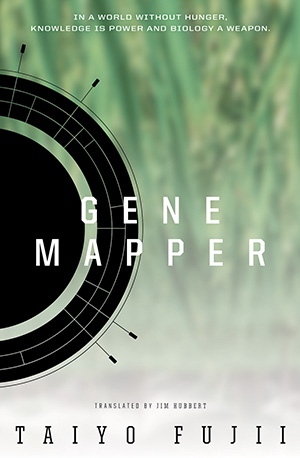 In a future where reality has been augmented and biology itself has been hacked, the world’s food supply is genetically modified, superior, and vulnerable. When gene mapper Hayashida discovers that his custom rice plant has experienced a dysgenic collapse, he suspects sabotage. Hayashida travels across Asia to find himself in Ho Chi Minh City with hired-gun hacker Yagodo at his side—and in mortal danger—as he pushes ever nearer to the heart of the mystery.

Sascha Leifens was subtitled across her chest. So this was the reporter my waitress liked so much.

Sascha shrugged her shoulders and tossed her bobbed red hair as she stepped down. I knew she was an avatar when her hair returned to exactly the same position. Most casters use RealVu to at least give the impression that they’re communicating facts. Not Sascha.

“There you have it. What do you think?” It was the voice from the interview. “The operating system he coded in a trance, while ignoring his responsibilities to society, has an astonishing flaw.”

A large chart appeared above her head with a string of thirty or so ones and zeros along the top. Below the ones and zeros was a date readout: years, months, days, hours, minutes, seconds.

“These are time values for Unix. Look closely. He used a 32-bit integer to express these values to the second, even though he knew very well that Unix would have to be viable for at least decades. The way he coded it, the time value will reach its overflow point next year—at seven seconds past 3:14 a.m., January 19, 2038.”

The time count on the chart rolled toward the overflow point.

Now almost all the numbers were ones. Sascha made a pistol with her thumb and index finger and took aim at the chart.

The last zero changed to a one, and all the ones rolled over to zeros. The time readout flipped to January 1, 1970, and the chart shattered into a million pieces.

“I’d like to invite everyone out there to ask software engineers and corporations what will happen when our PCs can’t handle time signatures correctly. I did, and this is the answer I got.”

Sascha lifted a corner of her shapely mouth and faked a male growl. “Well, miss, there won’t be enough 32-bit computers left in the world to matter.”

She shrugged. “When I asked how many computers will be affected, they couldn’t answer. Why? Because they don’t know. But for some reason, they do know there won’t be any problems. That’s techies for you.”

The sugar in my espresso couldn’t mask the bitter undertaste. Zucca’s coffee wasn’t very good. I felt like blaming Sascha. I couldn’t believe that a major information conduit like Times of the World would stoop to this kind of tabloid agitation.

First, nearly all CPUs are 128-bit now. Maybe there are some 32-bit devices out there that can’t be patched, but the programmer Sascha spoke to was right: there couldn’t be enough devices like that to make a difference one way or the other.

“Want to hear something even scarier? This flaw will affect programs that control forces powerful enough to threaten our very existence.” The studio monitors switched from the guy in the hospital to images of mushroom clouds over nuclear power plants, ICBMs popping out of silos, and fusion reactors melting down. Sascha frowned, shook her head, and turned both palms upward in a “Whatcha gonna do?” gesture.

“If this was a problem the human species never faced before, we might cut those programmers some slack. But in the year 2000, during the Internet era, the man in the hospital and his friends cre­ated an identical problem. They never learn.”

Video from the early aughts rolled past on the monitors. There was a red-faced kid with curly hair wearing a hoodie in a cubicle crowded with toys, then a guy with a bowl cut and old hippie-style clothes hunched over an old fliptop PC.

“These men developed one Internet service after another that violated our rights, especially our right to privacy. Worse still, they ignored the lawful ownership of intellectual property with their ‘Open Source’ movement, which brought billions in economic losses.”

As I half listened to Sascha’s anti-programmer tirade, I was thinking about something else.

The genetic engineering that had led to distilled crops used pro­gramming techniques developed during the golden age of the Internet. We isolate every gene that expresses specific traits and use object-oriented programming methods to manipulate these strands of DNA as black boxes. When we get the output we’re looking for, we capture it in genetic algorithms. The number of algorithms is sufficiently large that no one engineer can master them all.

My crop style sheets are based on methods originally developed to specify the look of websites. I don’t need to know everything about the genome itself. I just apply the extracted code for physical features to design the look of the plant.

I wondered what these young programmers were thinking when they first connected computers on a global scale, opening one door after another to the unknown. When he designed his operating system, the aging developer Sascha interviewed knew very well that his 32-bit timestamp would be obsolete in a few decades. He knew the risk, but he had other issues to juggle. The conflicts with human rights, privacy, the economy, national security—each new idea opened another door, a door they couldn’t close. But opening doors was always more important than the possible consequences.

“I’m sure you all remember what happened in 2017. The computer network they christened the ‘Internet’ collapsed because of built-in flaws, and the rest of us were locked out. This was a warning.”

Sascha peered intently into the camera and clasped her hands. Her tirade was about to peak. With apologies to the cast member who put me onto this, I had to say, it was all pretty trite.

“We must be vigilant about the relentless advance of science and technology. There’s no guarantee that programmers share the same dreams as the rest of us. What damage will their latest blunder bring? We’ll have our answer in six months. The apocalypse is coming.”